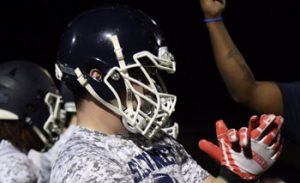 Braden
Kirkland
OL | 6'2 | 240
Shawnee | 2022 of Shawnee. The dominant class of ’22 product had a great season on the OL allowing just one sack, having 14 pancakes and no penalties on the season. One of the reasons Shawnee is such a great team in Oklahoma football year in and year out is because of some of their physically powerful and dominant OL line Kirkland who looks to put them ahead of the pack again for the 2019 season. Braden is a very aggressive lineman who will make a name for himself without question.

Six star football – Describe your season and, how do you feel you played overall for 2018?

Braden – I feel I played alright I could’ve played better

Braden – Listen to music and get a prayer in.

Braden – I don’t really have one

Six star football – What has been the best game you have had in your career and why?

Braden – The USA national game! Because you are playing the best of the best

Six star football – Teammate likely to be a college star?

Six star football – Player to keep an eye on: