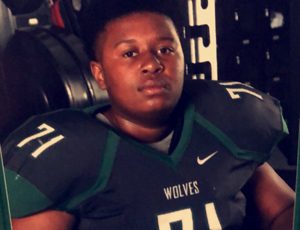 The future us a bright one for the Edmond Santa Fe DL, one of those future stars could be DL and power NG CJ Christon. Christon sometimes plays the offensive line but defense is his stronger side.

Consider him a straight get to it person. He is a very strong player that is also very versatile. Big time pass rushing threat through the middle. Versatile enough to play all along the offensive line besides center then the second half of the season CJ was second string nose guard getting 2 or 3 tackles a game

CJ- The most influential person in my life is my dad. He is always pushing me to my full potential and we just have a really good father and son bond. In the summer I did summer pride for Santa Fe football.

Six Star Football – What did you learn from camps

CJ – What I learned from that camp is the transition from 8th grade to 9th is different because you start working in their coaching system and you start getting some reps with the upperclassmen. One thing that I feel I have improved on during this offseason is my confidence. Our defensive coach told me at the end of the season that since it’s the offseason now, you can build your confidence in the weight room. My strength is another thing that I have improved on during this offseason. We started lifting weights like bench and squats and other circuits in general.

CJ-My pregame ritual is eating a pack of skittles and walking around the track with my music on full blast so I can just block out everything and get my mind right for the game. I really don’t have a favorite song because all my songs are pretty lit if you had to ask me.

CJ – My favorite class is Algebra 1 because I’m a really good at math and it’s one of the easier subjects that we have to learn.

CJ- My best game is whenever we played west Moore at Santa Fe. I had 3 tackles and almost a sack.

CJ-My biggest weight room accomplishment is to be lifting in the 200’s and 300’s by the end of this year and squat in the 300’s and 400’s. I feel like I’m going to overcome this challenge this upcoming summer as me and my dad are getting me right for the next football season.

CJ-One of my teammates that could be a star at the best level is Talyn Shettron. He is a very athletic stud with a high vertical plus he is y’all.

CJ- My hardest working teammate was Damon HarveyDamon
Harvey
DT | 6'0 | 215
Edmond Santa Fe | 2020. Damon plays defensive tackle and right guard on the offensive line, he never stops until the whistle blows and he is always in attack mode.

Six Star football—Teammate to keep an eye on

CJ-A teammate that you should keep an eye on is Tairee Tillman. Tairee plays wide receiver and safety, he got injured during the season so he only got to play the beginning and the end. He is one of our underrated I guess you could say because he is lengthy and can catch whatever comes his way.