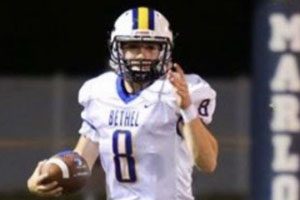 Corey
Metscher
LB | 6'0 | 170
Bethel | 2022 is one heck of defensive player and is only a freshman at that. He is a very aggressive and enthusiastic player and already a leader by example for Bethel. The All-State LB has already built a lofty resume for himself in his first season of varsity ball, Metscher will no doubt be a dominating defense force for years to come in the middle of the Bethel Defense. Tackles 143, 1 interception, 3 sacks, 4 caused fumbles, 4 touchdowns. Averaged 15.3 tackles a game, need we say more. Metscher is a big time defense star in the making for Bethel.

Six star football – Describe your season and, how do you feel you played overall for 2018?

Corey – The season was a building process and a complete turn around for our program. As a team, we set numerous school records and also individual records were met by players. Overall, I feel good about how I played this season and feel an achievement to start every varsity football game as a freshman. It was an honor to be recognized as a Linebacker on the All State Team selections along with some of my teammates.

Corey- This offseason I have been working on my speed and agility with my trainer and have been lifting daily.

Corey – I would have to say my brother is the most influential person. He pushes me to become a better athlete every single day.

Corey – So far I have not attended any camps since season ended. This is my first offseason being strictly focused on football.

Corey – My pre game ritual is me getting in my own zone. I listen to my music and think about what I’m going to be doing in the game.

Corey – My favorite song would have to be anything from Drake.

Corey – My favorite class in school would have to be math.

Corey – The best game in my career was in eighth grade against Little Axe. I had 6 touchdowns and over 350 rushing yards and 17 tackles.

Corey – My biggest weight room accomplishment has been making the 1000 pound club as a freshman.

Six star football – Teammate likely to be a college star