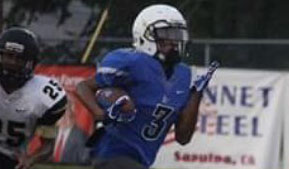 @dloading918
A star in the making, meet 2022 up and comer and RB D’angelo Mitchell of Sapulpa. Mitchell is a speedster that can have big time potential to be a defensive killer in the open field. Is a running back that has the ability to make 1 or 2 guys miss and on the defensive side Mitchell is an athletic guy that can move player either FS or CB and is already one of the best cover men on the team and also one of the top stock risers in the 22 class. Making a name, look for D’angelo Mitchell to be a player you will hear about I the coming seasons for Sapulpa.s

Six Star Football – How was your season

D’angelo – My 2018 season was great! As a freshman I had a role to our varsity team and it was a great opportunity to have that it was good seeing my team making it to the playoffs and showing everyone what we worked hard for.

Six Star Football –what did you improve upon this season

D’angelo – my summer was a really good one I did a lot of work w my team in the summer that’s the reason we were at the point we were at, I didn’t go to many camps, but this year I plan on attending a whole bunch

D-angelo – I really don’t have a favorite song, I listen to about anything that will call me or get my hyped it depends on the situation

D-angelo – besides myself would be Kenyon Kayemeyer he’s a talented guy when he works hard every one does!

Six Star Football – A player to keep an eye on

D’angelo – is Tezhon Taft he is a great athlete and open space he can make 1 or 2 guys miss, he’s super quick and light on his feet also!