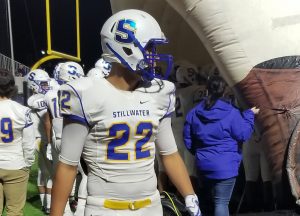 @GabeBrown2022
Year in and year out Stillwater High is one of the best and most dominant programs in the state and one of those reasons is that they always have great young athletes coming up in their system. One of those in line to do great things is 2022 class athlete Gabe Brown.

Brown had to play his Freshman schedule this season before he got moved up to the varsity. He was the only Freshman that was moved up and we believe that he is one of the best 2022’s in the State. Gabe comes in at 6’2″ and 200lbs right now and is a player that has always played both sides of the ball, but going forward will probably play more defense, MLB to be specific. Very strong for his age, Gabe has a bench max of 240 and squats 350, with a 40 time of about 4.8 right now.

Six Star — How would you describe your style of play in your position to those who have never seen you play before?

Gabe—I LOVE the game of football! Not just playing it, but the process of preparing and getting better. I’m an aggressive player with a high motor, I feel like I have a good nose for the ball.

Six Star — your season and, how do you feel you played overall for 2018?

Gabe—It was a successful Freshman season, I think I played very well on both sides of the ball. Gabe—I’m looking forward to helping Stillwater High School win a State Championship any way I can.

Gabe—Size, strength, and athleticism. I hit the weights hard on my own and during our summer workouts Pioneer Pride. I’m definitely bigger, stronger, and faster this year.

Gabe—My Dad, he’s been helping me since I started playing football. He’s very supportive and helps me with my workouts. He’s in the Army so he really stresses toughness, accountability, and being a good teammate.

Gabe—The main camp I hit this past summer was the OSU Prospect Camp. There weren’t many freshmen there at all, so it was fun to compete against all the Juniors and Seniors and see how I stacked up. I’m hoping to do more of those type of camps in the future.

Gabe—A big breakfast, and listen to music before the game.

Six Star — What has been the best game you have had in your career and why?

Gabe—Hard to pick just one, but our last game at PCO was a good one. We had to come from behind and I was able to help us win by returning a 65 yard pick 6. I also score a few TD’s on offense as well. It was nice to finish the freshman season on a high note with teammates.

Gabe—Benching 240 and squatting 350 between my 8th and 9th grade year.