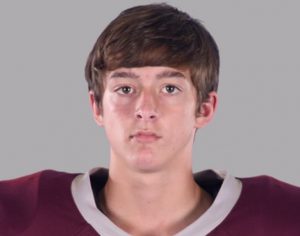 @_42_gannon
Meet one of the most talented freshmen in the state of Oklahoma and kid who as a great future in the coming seasons….Edmond Memorial’s Gannon Roberts!!!! He has a very strong arm and is a big time dual threat QB that can take hits. With unlimited potential and athletic ability, the sky is the limit for this young QB from Edmond.

Gannon—I feel like I had a great season and played great.

Gannon—I feel like I improved on being able to get the ball out quicker and reading the defense.

Gannon—My brother has been the most influential person in my football life so far.

Gannon—I attended the UCO super camp,t he ACU mega camp, the Arkansas State Camp,and the UCA camp. I took away that there are a lot of good qb’s out there and I need to work harder.

Gannon—I don’t really have a pregame ritual but I wear the same shirt every game day.

Gannon—I don’t have a favorite song

Gannon— The best game I have had is the Norman game this year because it was the most touchdown passes I have thrown in a game.