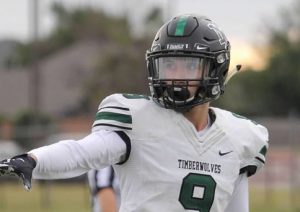 @hayden_dean
Coaches are always looking ahead, always looking at the next class of athletes to come and replace their talented seniors going off to colleges. Its part of maintaining success.

That holds true at Norman North High School where another young face is emerging onto the scene, Hayden Hack a wide receiver who dressed for a game this season. What coaches are excited to see is Hack’s size, speed, hands, and ball skills.

Hayden —I was the highest scoring receiver on the freshman team. I definitely improved my speed this offseason.

Hayden —My dad has been the most influential person

Hayden —I attended the southwest air quarterbacks and receiver camp, and this summer I will be attending the IMG football camp.

Six Star — What schools have looked at you

Hayden —but my pregame ritual is I always pray, and tape my wrist listening to the Motto by drake.

Hayden —best game I had I had 2 touchdowns and about 150 receiving yards.

Hayden —My teammate most likely to be a college star is Josh Koranda.

Hayden —Hardest working player is me