Sapulpa's Hunter Richards a Lineman to watch for in the Future 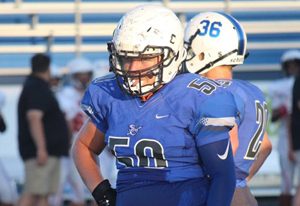 Meet Sapulpa freshmen DL and future prospect Hunter Richards, a class of ’22 lineman that has a lot of potential. Hunter started all 9 games both offensive and defensive for his freshman season. A versatile lineman, Richards played every position on the offensive line other than center and plays NG and DE on defense. Last year Hunter attended the Pro Football Hall of Fame Academy that he was invited to on Canton, Ohio. Richards is a three sport athlete who also plays basketball and is on the track team. He has some big plans to workout a lot of the summer to get bigger, faster, and stronger to maximize his chances at making a big impact. There look to be a lot of spots open in the coming 2019 year on the Sapulpa line because a lot of the guys were seniors this year. Hunter posted stats on 2018 of 11.5 sacks, 3 forced fumbles, and 13 tackles for a loss.

Look out for Richards physical play that can beat you inside and his speed to beat you off the edge. Hunter really likes to use a fake spin if he has an outside call so he can get the tackle on his heels.

What was your summer like and what camps did you attend

Hunter- My summer was a real eye opener for opportunities I was personally invited to the 2018 hall of fame academy in Canton, Ohio and earlier in the summer I took put in a Nuc Sports Premier Showcase.

What did you improve upon during the offseason

Hunter- My improvements this off-season we’re getting off the line faster and being more explosive and better hand placement.

What colleges are showing interest

Hunter – Myself by Nav

Player likely to be a good college player

Teammate to keep an eye on