Southmoore freshman wastes no time making a name for himself on OL, meet Joshua Clay. 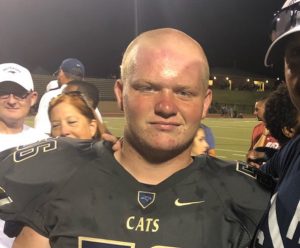 Not too many freshmen get to see varsity action, but the Rough and ready young freshman lineman at Southmoore is a rare exception. He is making a name for himself early and expect to hear that name mentioned over and over again over the next three seasons. He is a player that looks to pancake you every chance he gets at his center position.

Made his first start against powerhouse Stillwater, and started every game the rest of the season. This kid has some huge potential and is a player that will only getter bigger, faster, and stronger with age.

Joshua—The most influential person in my life is my dad.

Joshua—I went to one camp this summer held by SWOSU, I’m going to go to a lot more next season. During the off-season I wrestled so I was in better shape and had decent feet. Also work with one of my coaches on footwork and punch during the summer.

Joshua—I have had no college interest, but I am a freshman so I’m not too worried.

consists of me listening to loud music and getting mentally prepared.

Joshua—My best game this season would have to be the Edmond North game I had a some pancakes in that game.

Joshua—Is this summer I got my bench press to 230lbs.

Joshua—would have to be Donovan Gaines.

Joshua—Everyone should be looking at Brian Shomali this season, and people should watch out for DJ the nose-guard.