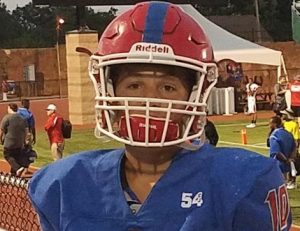 @kanedonovan2022
Kane is a young and upcoming pro style quarterback that can make throws on the run and in the pocket. Donovan also can scramble with good accuracy and has a great deep ball accuracy as well. A kid that can do it all from the QB spot and a bright future looks to be in store for the freshman prospect from John Marshall High School.

Was 16/18 passing for 230 yards this season in varsity action for John Marshall, so has had early success on the varsity scene. Shows good poise, accuracy and is on point with his throws.

Kane—I started the season with an elbow injury so I missed all of JV even though being named the starter. Once I was cleared to throw, I ended up playing in 5 Varsity games. It was a great learning experience playing with the big dogs. 16/18 passing over 230 yards and no turnovers. Our starter is a senior so I have some big shoes to fill next year.

Kane— My father has been the most influential person in my football life. I have had many doubters in my career but my father has always believed in me. He has coached me since I was 4. The time and money he has put in to my dream is just amazing.


Six Star — What camps did you attend

Kane—I have attended many camps last summer. Quarterback Impact and NextGen All American were some really challenging camps. The best of the best Quarterbacks come from all over the U.S. I think camps like these help me understand where I need to improve

Kane—as a freshman, not too many schools have reached out at this time. I have 5 schools that follow my NCSA profile and have sent invitations to camps and visit invites. Henderson State has showed the most love

Kane—I was born with a growth deficiency. Luckily my parents caught it in time and the doctors were able to help me mature at the correct rate. I have grown 5 inches and put on 40 pounds in just 5 months

Kane—headphones in and picture me make big plays

Six Star — Teammate to Keep an eye on-