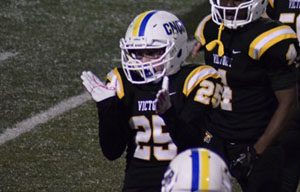 Meet Landon Cichon a freshman that has seen action in the Heritage Hall secondary and is a player that has a bright future. Landon was a starter for the Victory Christian Conquerors and played safety and some WR. Cichon has shown some good play recognition and has some nice speed. Also has seen some action on special teams and looks to be a valuable player over the coming years.

Landon – I feel I improved on my agility, strength, catching and recognizing plays better, running routes and getting a good mindset and mental toughness

Landon – I don’t die by Joyner Lucas with Chris Brown

Six Star Football – What teammates could be starts at next level

Landon – I don’t pick favorites most of the seniors would be a star at the next level like Ethan Church, Asa Colbert, Gabe Byrams, Garrett Williams

Six Star Football – teammates to keep an eye on