Union's Belt a player with a huge future and a load of talent!! 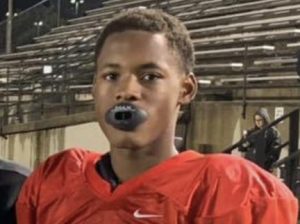 @makhaiiii
Meet one of the up and coming potential stars of Oklahoma football and the Tulsa are football scene. Makhai Belt helped the Union freshmen team to a Conference Championship. Belt had 10 TDs this season and felt he grew as a teammate & player. He improved on running routes and his speed, and continues to focus on those areas as well. Look for Belt to be a player you will hear many great thing from over the next several seasons.

Makhai—Tracy Moore, former OSU WR. I started working out with him this past season & am excited to continue to work on my craft with him.

Six Star — What camps have you attended so far

Makhai—Lost my father before I was born and my mother when I was 5. I have a great support system and can’t wait to honor my mom with a special tattoo when I’m able.

Makhai—I love math class and to listen to music.

Six Star — Teammates that could make a huge impact in college