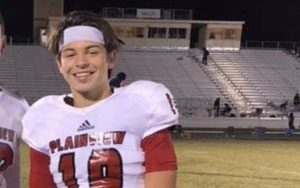 Blake
Nowell
WR | 6'4 | 185
Plainview | 2020 and Payton Webber and Taylor adds another big target that is among the talented trio. The offensive future should be a good one with Taylor as a target for the Plainview offense.

Six star football – what camps did you attend/take away

Reis – I attended the manning passing academy and the OU camp, I plan to take it to the next level and go to rival combines and hopefully get an invite to the second day, summer workouts got me a lot better also, I was in there everyday, I think I improved on my speed and shiftiness.

Reis – Don’t really have a pre game ritual, just like to be myself and try my best

Reis- I listen to all kinds of music, mostly just whatever they play in the locker room,

Reis – would have to be history

Reis – would have to be the whole team, we all work hard

Six star football – player to keep an eye on