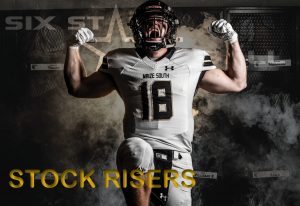 Panhandle offensive play makers in the class of ’22-We look at some of the most impressive offensive weapons in the Panhandle area class of ’22.  Players like QB Dalton Briggs, 6-3 at Tate and a player that made the most of four games with 718 yards and 10 TDs, no doubt one big time effort in his four games. JoJo Blackmon of Escambia is one of those big time athletes at WR that can make some big time plays and certainly has the tools to be a next level recruit as well.

Dalton Biggs, 6’3, 175, QB, 2022, Tate @DaltonBiggs2
The impressive junior QB at Tate has a nice long frame at 6-4, 175 pounds and no doubt is one of the hot junior QBs in the Panhandle region.  Biggs is one of those QBs that can really make it happen with every chance he gets, despite being sidelined due to injury for most of the year, Biggs had 718 yards and 10 TDs in just four games on the 2020 season and no doubt proved he could be that on fire QB that can be as dangerous at they come.  Runs a 4.8 in the 40 yard dash so does has some speed to make things happen when he needs to.

JoJo Blackmon, 6’0, 175, WR, 2022, Escambia @JBlackmon850
Huge athletic talent that can make some of the most amazing grabs you will see, very impressive hands in the ’22 class for Escambia, Blackmon is one big time play making athlete with speed and hands that make him one of the elite play makers in the region. Could be one of the most underrated as far as his big play making skills in the open field, big time potential for sure for Blackmon.

Trenton Hall, 5’11, 165, ATH, 2022, Navarre @Trenthall2022
The big time Navarre athletic play maker and WR can  make the big plays down the field and is a team leader that plays with a lot of emotion on the field.  Hall is one of those guys that can use his 4.43 speed to be a WR that can prove nearly impossible to cover with his break away open field speed and footwork.  One of the tops and a big timer no doubt. A very electric play maker in the open field with both electric speed and very good hands as well.

Rock Holland, 6’1, 180, WR, 2022, Arnold @rock_holland
Holland is very built very athletic and has a strong lower body, and is a very good open field play maker and runner  with the football, can be a good yards after catch play maker and impressive down field threat that has good hands and good footwork to watch for in the open field.  Holland has a big upside to his game and could be one of the busiest and most talented WRs in the 2021 season.

Waymond Jordan, 5’10, 195, RB, 2022, Catholic @All_Americann28
Pensacola always has a load of talented players and  RBs as well and we really like this big timer in the class of ’22, a hard impact runner also that can be a punisher at 195 pounds with a 5-10 frame for Pensacola Catholic.  Jordan is one of those backs that can make people miss and take it for some long gains while stretching the field to the limits on the outside edges. He racked up 479 yards on 127 carries and had eight receiving touchdowns and  56 yards receiving, added 20 tackles and an INT on defense as well.

Rasheed Lovelace, 6’3, 310, OL, 2022, Pine Forest @RasheedLovelace
One of the elite OL prospects in the state of Florida, the Pine Forest big man stands in at 6-3, 310 pounds and is a load and major force to try to get past if you are an DL going up against this mountain of a man.  Lovelace has a lot of interest from schools like Coastal Carolina, Liberty,  South Alabama, Western Kentucky just to name a few from his big time long list of schools looking at him.  Holds offers from UAB, Vanderbilt, & Nebraska Had 21Tackles, 2TFL 2sacks and 82% and 38 pancakes in 2019 as a super sophomore and can bench-310, squat-500, and deadlift-250.

Cade Roberts, 5’11, 180, WR, 2022, South Walton @cadenroberts5
Led Florida in receptions with 88 and receiving yardage with 1,350, which was also good for 10th in Nation. One of the most athletically gifted and well put together WR prospects in the state, this ’22 target is very well put together and one of the most impressive looking wideouts in Florida, Roberts is a player that has been named a 1st Team All-NWFL/FBU-Adidas Fresh/All-American during his impressive career.

Jamarian Speights,5’9, 155, WR, 2022, Crestview @JamarianSpeigh2
Speights is one of those big time looking class of ’22 WRs that has speed and big time hands and is a player you have to enjoy seeing just how impressive he can be.   Speights out of Crestview is a player that be as exciting of a player as you will see, big time open field moves that freeze defenders in their tracks, not only a huge pass catching threat but an elite special teams return man that has another gear to his speed and open field skills.  One of the truly amazing athletes on a Florida football field.

Will Taylor, 5’11, 175, RB, 2022, Chipley @willltaylor3
Although Taylor is more known for being a big time heavy hitter from his LB spot, when he lines up out of the Chipley High backfield he has the same thing in mind, run defenders over and make it hurt, gets the yards and claim every inch of the field for yourself. No doubt a physical player and  a very hard playing junior, you have to love his all out pure hard playing style and is toughness and ruggedness on the football field.