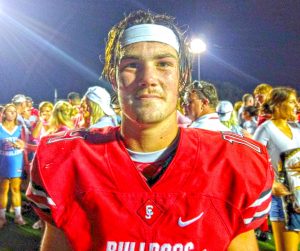 Arguably the two best Class 4 teams in Missouri will square off again in what is a pseudo COC championship game and will go a long way towards deciding home field in district play. Their last 13 meetings in Webb City have been pure domination by the Cardinals, with an average score of 42-11. The closest game in that span is last year’s 27-12 decision. Seven of those games were either turbo clocks or shutouts.

Webb City owns the mental edge in this matchup and has for decades. To them, this is a big game, but they’ve been in bigger. This is Carl Junction’s Super Bowl ever year. The way upsets typically happen is through big plays and turnovers. It took seven Webb City turnovers (7) to open the door for CJ to pull off the upset in 2016. It is imperative the Cardinals take care of the ball. No Mike Smith and an inexperienced defense means there could be some growing pains defensively; don’t put them in short field situations or leave them on the field too long. Avoiding those pickles gives CJ’s home run threats like Joe Kennedy less touches to break a big one. Everyone is still questioning what CJ will look like offensively without Ray Weston

Ray
Weston
RB | 5'11 | 195
Carl Junction | 2019. Making them sustain drives would be beneficial, especially if they’re playing from behind.

If I’m Carl Junction, I load the box and force someone besides Durand Henderson

Durand
Henderson
RB | 6'0 | 180
Webb City | 2019 to beat me. Even with Zeke Wall, the Cardinals still rushed for 634 yards in two meetings last year, averaging 6.2 yards per rush. Henderson accounted for 436 of that on just 44 carries. You can’t beat Webb City without them getting behind the chains and if you can’t stop the veer then that won’t happen. When Carl Junction beat Webb City in 2016, the Bulldogs defense allowed just 73 rushing yards on 35 carries. Webb still threw it for a season-high 154 yards, but it wasn’t enough. The Cards have incredible weapons on the outside in Alex Gaskill

Alex
Gaskill
DB/WR | 6'2 | 185
Webb City | 2019, Terrell Kabala and Treyton Simmons, but this is still quarterback Cade Beason’s first run as the unquestioned starter. He could come out and throw darts, blowing this argument up, but I’d make him prove it.

The answer to Webb City’s success this season could be No. 1. He’s a two-way guy with great speed. As a freshman he changed the CJ-Webb matchup in districts with his speed. His presence softened CJ’s defense, which is a major reason the Cards won that 2016 district title. Gaskill has great hands and is more polished, but Kabala is the big-play threat. Defensively, he’s also a playmaker. He picked off Kennedy last year and nearly broke away on the return. If CJ does load the box, Webb City will need some perimeter guys to make plays. Kabala is capable of doing just that.

Carl Junction has struggled offensively against CJ, but one area they’ve had success is in the passing game. Weston has averaged 54 receiving yards on five catches in his last three games against Webb City. That’s a place where CJ can sustain drives and move the chains. Maxwell is a former receiver and is comfortable catching the ball out of the backfield or split out. He’s also able to run with power between the tackles. Maxwell could have a huge season in place of Weston, it’ll be interesting to see how many touches he gets and where he’s lined up at. He had eight receptions for 98 yards and a score against WC last year, if he can add on to that production, watch out.