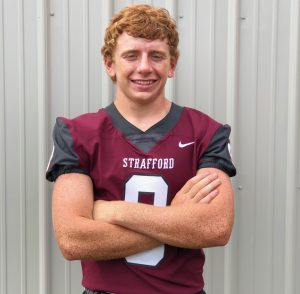 Traditionally, the Strafford-Fair Grove game is one of the best in Class 2. Two times in the last five years, one of these teams has entered a playoff game with state power Lamar undefeated. This year they’ll meet each other with matching 5-0 records and the hope of again meeting up with Lamar in a battle of unbeatens. Fair Grove and Strafford have split their past eight matchups. Three of those were decided by one possession. This could be the first of two games, with Strafford and Grove ranking 1-2 in Class 2 – District 3. Here’s what you should know going into tonight.

Defense wins championships and Grove has been one of the best in the Ozarks under Bill Voorhis. The Eagles have posted shut outs in seven of their last 15 games, four of those have happened this year. Allowing one score all season is impressive, but it’s the athleticism and ability to stuff the run and make teams pay when they become one dimensional that makes Fair Grove so sound defensively. If they can keep Strafford in obvious passing situations on third down and take away their balance, the Eagles will be put themselves in position for a huge win. The two big names to know are juniors Darin Oplotnik and Bryce Thornton. Oplotnik has taken over following the graduation of standout Hunter Robertson and his production has been fantastic (7 sacks in 5 games). He’s physical and plays with a high-energy motor, giving Fair Grove the ability to pressure quarterbacks without necessarily having to blitz. That quarterback pressure has allowed Thornton to come up with six interceptions through the midway point of the season; he already has three defensive touchdowns. It’s no secret that Strafford is going to try to stretch the field vertically and horizontally. If Oplotnik – both Darin and brother David – can apply pressure and make Strafford senior quarterback Wyatt Maples uncomfortable, Fair Grove’s secondary will have to cover slick Strafford receivers for less time. Strafford has four skills players that have had plays of at least 50 yards. Tim Hester’s teams are notorious for hitting home runs. If the Indians aren’t forced to sustain drives, historically, they’re a threat to blow a fuse on the scoreboard. Friday won’t be an exception.

How Strafford wins – Establish the run

For as much as we talk about the high-powered Strafford offense traditionally – especially their passing game – the Indians have run the ball as effectively as anyone. That balance has been the reason why big plays have been routine through the air. This season, Ian Bareis is that dude this season. He’s racked up 637 yards and nine touchdowns on just 67 carries; he’s averaging nearly 10 yards a pop with 100-yard performances in four of five games. If Strafford gets him going early and creates second and/or third down and short situations, Hester will have his entire playbook at his disposal. That means Maples and receivers Dillon Hester

Dillon
Hester
WR/DB | 6'0 | 150
Strafford | 2019 and Mason Foley could see favorable coverages with minimal safety attention. Strafford is averaging nearly 50 PPG this season. Keep in mind, from 2012-14, Strafford scored at least 50 points on 19 different occasions. That explosive offense has clearly returned. Strafford has been extremely physical up front on both sides of the ball. If they can stay balanced by establishing Bareis and the run game early, Maples will have an easier time pushing the ball downfield.

His senior year is going to be one for the record books. Despite being in his first year as a starting quarterback, Maples has passed for 1,225 yards and 21 touchdowns (0 interceptions) in his first five starts this season. It’s worth mentioning that he’s had just 29 incompletions all year. If we were talking NFL numbers, his QBR would be pushing 100. He throws a beautiful deep ball, accurate on the move and right now he’s playing with a ton of confidence. 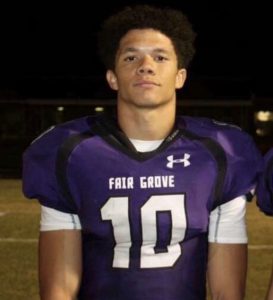 I love playmakers like young because they don’t need many touches to hit a home run. The senior “slash” guy had rushed for 334 yards and five touchdowns, but also has 249 receiving yards and another score. All of this coming off of a junior campaign in which he racked up 700 yards both rushing and receiving. He’s a game-changer no matter where he lines up at and must be accounted for at all times. Fair Grove has done a tremendous job of getting him perimeter touches this season, except him to get 20ish touches on Friday night. 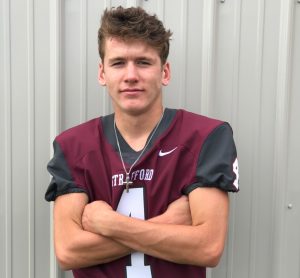 It’s scary how much Dillon looks like older brother, and current Evangel standout Dallas, on film. He’s a long, rangy athlete that stretches the field and as dynamic after the catch. In fact, he might have more wiggle than Dallas did. He’s averaging nearly 20 yards per catch and he runs routes like a veteran receiver. This is a kid that schools need to get on their radar immediately. His numbers are just silly at this point with 36 receptions for 703 yards and 10 touchdowns; he’s caught a touchdown in every game this season. He’s also returned a punt for a score. If you enjoyed watching Dallas play then I strongly encourage you to check out little brother.

Brother Darin has had a sensational number as well, but David isn’t chopped liver. The 6-foot-5 outside linebacker is every spread offense’s worst nightmare. Watching people run the option or read off of him is comical because he’s long enough to take away both options. He uses his hands well to shed blocks and he finishes plays. He also deflects a lot of balls at the line, but can also rush the passer. He’s going to have a chance to make a lot of plays in this game. He’s a college basketball prospect too, but his future could be best on the gridiron.