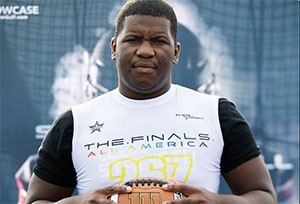 At 6’4, 275-pounds, he is a dominant performer, able to open big holes in the run game, as well as protect his quarterback. He has a strong, powerful base, plays with good balance and leverage and brings a unique competitiveness to the field.

Parson was a standout performer Memorial Day weekend at TheFINALS All-America Showcase and has since drawn an offer from Boston College and interest from several other programs as well. Parson is currently the No. 11 overall ranked prospect in the Six Star Football Class of 2024 rankings, and the No. 2 ranked offensive lineman prospect. 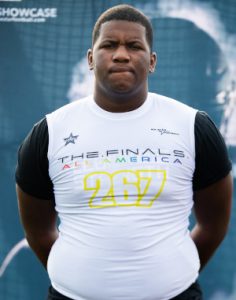 “If I had to describe my game it would definitely be dominant,” Parson said. “I’m really competitive and I don’t like losing a rep ever. Something I would say I do well is move my feet, ,coaches always tell me I have good feet for my size.”

Parson says he entered the season with high goals, including going back-to-back as Class 6 state champions, and individually, he hopes to earn first-team all-state, all-metro. On Friday, CBC improved to 4-1 with a 41-28 win over MCC rival DeSmet.

“So far my season has been going well,” he said. “I feel like I’ve been playing real good , moving guys off the line of scrimmage. My team is playing good right now, still working on our team chemistry though.”

Parson has been in contact with several college programs this fall, and plans to take game day visits to Iowa State and Nebraska this fall.

— A fan of offensive lineman Tyron Smith of the Dallas Cowboys.

“I like how he vice grips the DT and that’s something I’m good at,” Parson says.

— When he’s not playing football. …

“When I’m not playing football I love playing the game,” Parson said. “I am a game head.”