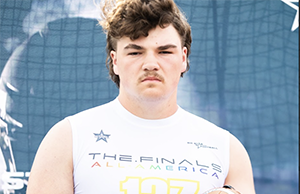 One of Kansas City’s premier offensive linemen in the 2023 class, Kearney’s Carter Schmidt is putting together a strong senior season for the Bulldogs.

At 6’5 ¾, 270-pounds, Schmidt has terrific size, length and the kind of athletic build that will likely add good muscle mass and weight with age and continued work in the weight room. He has not allowed a sack this season and has helped Kearney open the season 5-0 with impressive wins over a trio of tough opponents — Platte County, Fort Osage, Smiithville — to start the season. 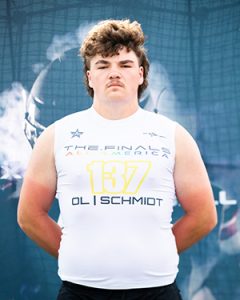 Named a team captain, Schmidt has helped a well-balanced Kearney offensive attack average 35 points per game this season, including 52 and 44 in its two most revent wins.

“I would describe myself best as playing through the whistle and overall dominant,” Schmidt says. “Our team is 5-0 and has succeeded on the ground as well as in the air.”

Schmidt says the team’s goal this season is to win a state championship and the Bulldogs are currently ranked No. 2 in Missouri Class 4.

Schmidt says he is a fan of San Francisco tackle Trent Williams because, “Of how athletic and nasty he is,”

A standout student who reports a 3.8 GPA, Schmidt says when he’s not playing football he enjoys hunting and finishing.

He currently holds offers from Indiana State, Southern Illinois, MO West, Pitt State, Valparaiso, and Yale and is drawing interest from several other programs as well.