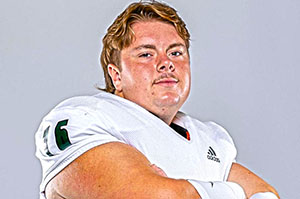 Kody
Black
OL | 6'4" | 305
Melbourne | 2023 has seen his recruitment pick up in recent weeks and recently drew an offer from South Florida as he is putting together a strong senior season.

At 6’4, 285-pounds, Black takes pride in his ability to protect his quarterback with strong play in pass pro, and is a bulldozer in the run game as well, opening up holes at tackle on the edge. He says he has played alongside Melbourne QB Hunter Turner since he was 7-years old and sees his job on game nights to help give him a clean pocket to throw from.

“I’m a protector,” Black says. “ I’ve played the line since I was 4-years old. I’ve protected Hunter since I was 7-years old. We played youth ball together and won six Super Bowls and went 90-2 doing so.” 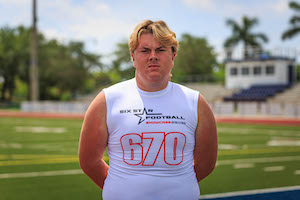 Black was a standout performer at the Six Star Football Showcases Florida Showcase on Memorial Day weekend in 2021 at Westminster Academy in Fort Lauderdale.

Melbourne is off to a 3-1 start this season with a tough loss to Lake Minneola, a powerhouse program out of the Orlando area. Black says he is looking forward to a big game this week against state ranked Cocoa.

An all-state selection last season and a four-year starter, Black is a physical player who plays the game with a big motor and likes to get after it. He has played all over the offensive line throughout his career, including the center position wher ehe played as a freshman and remembers going up against Desmond Watson from Armwood High in the playoffs who currently plays D-Line for the Florida Gators.

“That was an eye opener,” Black says. “I figured I’ve faced the best now time to work and get better.” 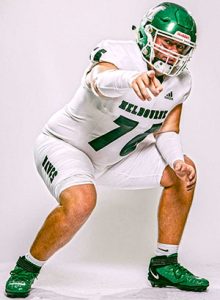 He recently had the opportunity to attend a game day visit to South Florida a couple weeks and will be attending a game day visit at  Georgia Southern this weekend. Next weekend he plans to attend University of Iowa on a gameday visit as they take on Michigan.

While a tough, physical player on the field, Black says he is low key off the field and enjoys the Florida beaches, hanging with friends and playing a round of golf.