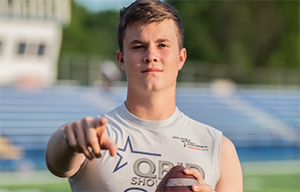 At 6’3, 205-pounds, Van Dyne has a strong left arm and can spin it with the best of them. He has a calm presence in the pocket and under pressure doesn’t rattle. He can make all the throws, including the deep out, can fire it over the middle and fit passes into tight windows, but is at his best hitting the home run ball with a talented core of receivers at Liberty North. 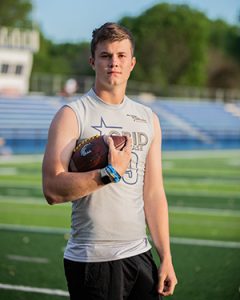 As a freshman, Van Dyne watched as his older brother Jake led the Eagles to an 11-1record and to the Missouri Class 6 quarterfinals. A year later, he  threw for over 400 yards and four TDs and last season, Van Dyne led Liberty North to an 11-2 record and an appearance in the Class 6 state championship game, throwing for 2,141 yards, and 21 TDs while completing 65 percent of his pass attempts.

Van Dyne drew an early offer from Mizzou last fall, but since the Tigers got a commitment from Tecoma, WA four star Gabarri Johnson in May, he says the Tigers have backed off. He also drew an offer from Lindenwood on April 4, and has heard from Wyoming, Arkansas State and most recently UAB, where he attended camp in Birmingham. UAB extended Van Dyne an offer on July 23.

Still, Van Dyne has nothing but positive reviews for the Missouri Tiger football program.

“The experience of the Mizzou offer was kind of a surreal experience because it felt like all of my hard work had been noticed,” Van Dyne says. “Mizzou has top notch facilities and it’s hard not to be impressed by them. I’ve been to Columbia a handful of times and have always had a great time.” 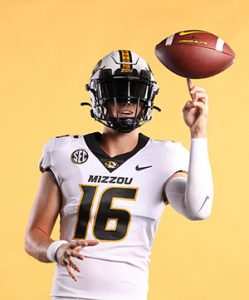 “I think Mizzou has made some good moves recently in the recruiting game,” he said. “Their best pick up was 100 percent Blake Craig. He’s the best kicker in the nation and is one of the hardest workers I know.”

Van Dyne hasn’t been on the road much for visits this summer, instead opting to stay close to home and prepare for his senior season.

A fan of Green Bay Packers QB Aaron Rodgers, Van Dyne says he tries to do whatever is necessary to help his team win.

“I would have to say I kind of model the way I play off of what our offense needs and not really a specific player,” he said. “I do like to try to do the things Mahomes does sometimes though.”