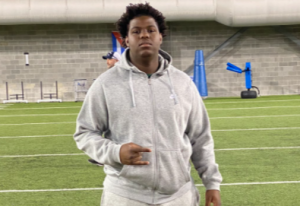 Here, Six Star Football takes a look at several OL  prospects in the 2022 class in the Miami area to know.

Patrick Atkins, 6’2, 280, C/OG, 2022, Gulliver Prep @2strongpat
Taking a look at the big and impressive 6-2, 280 pound prospect, Atkins still has two big seasons to impress and we expect him to do just that and more for Gulliver Prep.  Atkins is an OL that shows he can really finish off a block with the best of them.  A driver that locks up with his man and then keeps the legs going and is tough and aggressive with his hands.  A very impressive class of 2022 big man with sky is the limit potential ahead.  Southern Miss is the first school to offer, we think it will be hard to pass up the bulky and powerful man that impresses with many key aspects in his game.

Luis Bodden, 6’0, 275, OL, 2022, Immaculate-LaSalle @LB5star (pictured)
This Second Team All-Dade County big man is a guy ready to have a huge junior season ahead and has all the skills to be one of the top looking Dade County big men.  Bodden is a guy that uses his 275 pounds very well and is a guy that shows he can block at the next second and in space. Has visited Georgia Tech and Tennessee among the big time programs that very likely could be interested in this class of 2022 up and coming future star in the making.  One of the best OL in Florida at containing his guy and keeping him off the ball.  Impressive power and toughness on the field. He was a standout at left tackle last season, but shows good versatility.

Tellek Lockette , 6’3, 300,OL, 2022 Northwestern @Tlockit_74
The class of 2022 super star in the making was on the 2018 and 2019 State Championship teams and for 2019 Tellek earned 1st Team All-dade and All-State.  Does a great job getting to the backers and making down field blocks.  Is very powerful and dominates off the snap, and man handles his guy with an impressive 6-3, 300  frame, Lockette moves very well on the field and has a tall frame and impresses.  We like his ability to dominate his man and use his hands very well. FAU and Southern Miss have taken early notice and were the first to place offers on the table for one of the elite class of 22 lineman in the state of Florida.

Elijah Miller, 6’2, 295, OT, 2022, Central @Majorprince4
An impressive and aggressive pass protector who has a lot of force off the line. He has quick feet and is good at using his speed to get around opponents but can also power his way through contact by bodying up opponents and forcing them off their line of sight. He can hold his ground well and has good upper body strength and has a way of leaning on opponents and taking them to either one side or the other and slinging them to the ground. A promising ‘22 lineman who can see time as a tackle or guard given his athleticism and physicality.

Jason Seraphin, 6’3, 270, LT/DT, 2022, North Miami Beach @JasonSeraphin
An extremely underrated prospect with a high ceiling, Seraphin explodes off the line and shows an elite sense of power and playmaking ability on both sides of the ball. He can run through pass protection and can catch opponents off balance and simply run over the competition on his way to the backfield or adjust himself by pushing off guards and tackles and then get to the ball carrier for a bigtime blindside tackle. As an offensive tackle, Serphin is even more dangerous. He shows great footwork and the upper body strength to fling off edge rushers with ease. A player with a solid frame, good speed and a high IQ and natural feel for the position.

Kaylin Smith, 6’4, 310, G, 2022 , Booker T. Washington @KaylinS80969058
Smith is a big player with the size and build to see time in a variety of positions on the o-line. A player at his best as a OG, he’s listed at 6’4, 310-pounds and has already earned an offer from Kentucky.  Smith has a way of leaning on players and putting all his weight in front of him which helps him as a pass protection player. He can move well around the line and he gains speed as he goes. He has good length and improving footwork and hands and can bump opponents back and help his teammates create holes and make timely hits to LBs looking to come inside and sneak past the line to get the backfield. At last report, Smith held an offer from Kentucky. 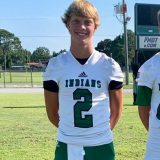