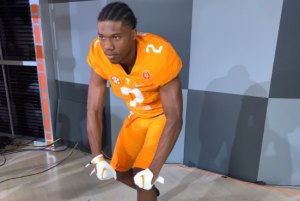 Six Star Football takes a look at several of the Panhandle and Big Bend area’s top defensive line and defensive end prospects in the 2023 class.

Timari Brown, 6’3, 300, DT, 2021, Wakulla @TBrown5859
Also a transfer from Leon, Brown is a motivated prospect who has good toughness, size and physicality. He runs well for his size and he holds his weight well and can get up and make plays in the pocket and down field. Listed at 6’2, 300-pounds, he is quick after the snap and can use his frame to overpower opponents and get to the ball. He throws off coverage and can overtake rushers with ease. He has a lot of power and some impressive speed up the middle and knows how to win one-on-one situations and can then move to another blocker and then pull down the carrier and help his teammates finish plays. Brown currently holds an offer from Alabama A&M. He reports a 23 vertical, 415 bench, 500 squat and a 515 deadlift. He reports a 3.0 GPA.

Joshua
Farmer
DE | 6'4 | 240
Gadsden County | 2021, 6’4, 240, DE/OLB, 2021, Gadsden County @colaboy_j5
An elite defensive prospect who has great speed, great playmaking ability and a knack for getting to the ball. Farmer is a 6’5, 240-pound athlete who has good muscle tone and a natural feel for the field. He moves well from side-to-side and he can get to the pocket and take out the QB or the ball carrier head-on or from behind. Farmer hits hard and can lay out opponents and take the wind from them on impact. The Florida State University commit shows all the intangibles needed to make plays at the next level and has great leadership skills and a can-do, lead by example attitude and that rubs off on his teammates.

Darrell Jackson, 6’5, 245, DE/DT, 2021, Gadsden County @95productions1   (pictured)
The University of Tennessee commit has been pushing himself this offseason showcasing his instentisty, drive and all-around potential as a prospect. He’s listed at 6’5, 245-pounds and has great length and strong hands. He’s posted some high-intensity workout sessions to social media focusing on his conditioning, cardio and all-around strength training. Jackson is a high-energy player and a tough one to stay in front of. He has great strength and a hard-nosed mentality and a way of moving opponents off their line and getting to the ball carrier and play caller. He is physical, imposing and has a nice combination of strength and athleticism making him a difficult DE/DT/LB to stop. .

Grady Kelly, 6’4, 260, DL, 2021 Navarre @Grady_kelly96
A strong defensive lineman who has a good feel for his position, a high IQ and a lot of potential as a prospect. He is a good-sized player who gets to the ball and gets through double and sometimes triple coverage on his way to the QB. An interior lineman who powers his way through contact and continues to dig his feet in the ground and use his arms and shoulders to move off opponents and create separation from guards and tackles. Kelly is listed at 6’5, 260-pounds and has good athleticism and a lot of power off the line. The Colorado State commit has a solid work ethic and a good deal of confidence in one-on-one situations.

Marquis
Robinson
DL | 6'3 | 290
Milton | 2021, 6’3, 300, DL, 2021, Milton
A highly recruited prospect with a strong frame and good size and length. He’s listed at 6’3, 300-pounds and he can get through coverage and break up plays in a variety of ways and in a variety of situations. Robinson moves well horizontally and can spin his way out of a blockers arms and then greet the ball carrier with force and power. He has a high ceiling as a DT prospect and has a lot of major schools expressing interest in his talents and athleticism. Robinson currently holds offers from Auburn, Florida State, Alabama, Ohio State and Georgia to name a few and has the ability and potential to see time quickly at the next level. An impressive tackle that everyone will be watching closely this upcoming season.

Xavier Young, 6’4, 245, DE, 2021, Godby
The Washington State commit showcases a lot of strength and power off the line for Golby. The strongside defensive end has the ability to disrupt plays and force opponents to game-plan against him and run plays on the opposite side. He is a quick, well-conditioned player who is in great shape and shows a good upside overall. He runs hard and can make plays in a variety of ways, powering his way to the ball and using his speed on the outside as well. A 6’4, 245-pound athlete with solid speed on the open field awho can change directions, throw off a blocker and then make strong tackles on the ball and force turnovers.