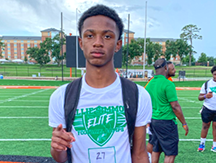 Florida’s Tampa area features several of the state’s top prospects at a variety of positions across the board. With the season underway, Six Star Football is taking an inside look at the prospects college programs are looking at this season.

Here, Six Star Football takes a look at several of the top wide receiver prospects to know in the 2021 class in the Tampa area.

Justis Crutcher, 6’1, 180, WR/FS, 2021, Seffner @JustisCrutcher
An explosive and underrated athlete overall who shows terrific bounce and great hands for both sides of the ball. He is capable of flying around the field and shows potential as both a receiving option and a free safety. He has great size for both positions at 6’3, 180-pounds and he hits extremely hard and can stop rushers before they have a chance to turn and take their first step. He can get up and climb the ladder and has a strong leaping ability which shows up when you need it most. An underrated prospect overall who is also under recruited given his athleticism. He reports a 3.6 GPA.
🎥 https://www.hudl.com/profile/9676264/Justis-Crutcher

Jaedan Dunning, 6’1, 170, WR/DB, 2021, TB Christian @Jaedan2Lit
An all-around playmaker on both sides of the ball who is impressive and very productive whenever he is on the field. He understands roots and is good at figuring out opponents and their habits which often comes in handy on defense. He can create and break away from defenders as a receiver and is good after the catch as well. An  athletic talent who has good twitch and length and shows a fluid nature on both sides of the ball. Dunning currently holds offers from Southern Miss, Troy, Vanderbilt, Wyoming, UT Martin, Buffalo, Louisiana Monroe and Liberty University and has received a lot of interest from several other programs. He also reports a 3.2 GPA.
🎥 https://www.hudl.com/profile/12315361/Jaedan-Dunning

Renaldo Garcia, 6’1, 160, WR, 2021, Berkley Prep @RjGarcia_1_
The Kansas State commit brings strong athleticism and a solid skill set to the field. He shows great speed and athleticism and can get up and bring down the ball through contact as well. A sought after receiver who has attracted a lot of attention as a skill player and can burst off the line and fake out opponents and get open looks. He can create after the catch and also looks to find openings and move the ball as a return man. Before announcing his commitment he held offers from Georgia State, Coastal Carolina, Tulane, FIU, Bryant, Western Michigan, FAU, University of Massachusetts, New Hampshire, Howard and Lafayette and UT Martin to name a few.
🎥 https://www.hudl.com/profile/10307645/Renaldo-Garcia-II

Jarquez Green, 5’11, 175, WR, 2021, Clearwater Central Catholic @JarquezGreen
A promising player with good footwork and misdirection for Clearwater who can see time on both sides of the ball. Green has great size for the position and shows strong mobility and terrific speed down the field. He’s an excellent option for long balls and can make terrific catches along the sideline through contact. A highlight caliber style player who is tougher than you think and physical and shows a good upside and an underrated quality to him given his athleticism and creative spark in one-on-one situations. Green recently picked up his first Division I offer from UT-Martin.
🎥 https://www.hudl.com/profile/9613439/Jarquez-Green

DeSean Henry, 6’2, 185, WR, 2021, Boca Ciega @desean_henry
A tall and athletic two-way prospect who has good speed and shows the ability to get down the field and out run his opponents. He’s listed at 6’2, 185-pounds and he looks to get out quickly and provide QBs with an open and clear target outside the numbers. He has strong athleticism, good hands and has some high point ability as well. He is confident when matched up against strong DBs or athletic safeties and can hold his own and find ways to score and come down with the ball. A smart and athletic player who has a good upside moving forward. Henry currently holds offers from Tennessee State, Gardner-Webb, UT Martin, Notre Dame College and Southern Mississippi.
🎥 https://www.hudl.com/profile/9814689/Desean-Henry

Richie Ilaraza, 5’10, 175, WR, 2021, Calvary Christian @Richie_ilarraza
An extremely talented and confident prospect who can fly through the air and make tough, physical catches look easy. He has a strong skill set and shows confidence in a variety of ways, looking to outmaneuver and outplay an out work anyone that’s matched up against him. He plays physical and loose and can be counted on to make athletic plays in crunch moments. Ilaraza has a smooth game as well and can run over players and avoid contact just as easily when he’s making plays after the catch. At last report, Ilaraza currently holds offers from Southern Mississippi, UNC Charlotte, UT-Martin, Georgia Southern, University of Massachusetts, Gardner Webb and Howard University.
🎥 https://www.hudl.com/profile/9443945/Richie-Ilarraza

Cardrece Mobley, 6’4, 200, WR, 2021, Clearwater @_Cardrece_
The USF commit brings great size and overall technique to the field. He is a strong overall athlete with great bounce and the ability to make terrific and often highlight real style catches through the air. He can take hits and maintain control of the ball and shows the athleticism and speed to make massive gains on the ground after the catch. An explosive player who has a high ceiling and will likely continue to produce at the next level. Before announcing his commitment he held offers from Indiana, Tennessee State, FAU, Boston College, Buffalo, Marshall, Bowling Green, Wake Forest, Liberty, Toledo and the University of North Carolina at Charlotte to name a few.
🎥 https://www.hudl.com/profile/10254026/Cardrece-Mobley

Charles
Montgomery
WR | 5'11 | 182
Armwood | 2021, 5’11, 182, WR, 2021, Armwood @Iam_charlesM3
The Florida commit brings an elite combination of speed, athleticism and terrific high point skills to the field period he is elusive in his routes and shows the ability to fly through the air and make plays and avoid contact extremely well after the catch. He’s a physical ball carrier as well who can create his own path and zip through coverage with ease. Montgomery explodes on film and has the kind of play making ability and breakaway speed that is hard to come by and even more difficult to stop. Before announcing his commitment Montgomery held offers from miami, Arizona State, Alabama, Minnesota, Georgia Virginia Tech, Kentucky, LSU, Ohio State, Maryland, West Virginia and Iowa State to name a few.
🎥 https://www.hudl.com/profile/9573873/Charles-Montgomery

Nikolas Tishivuadi, 6’4, 180, WR, 2021, CAI @Nicktk_2
Tishivuadi is a big prospect who has strong athleticism and great size overall. A 6’4, 180-pound player who can create big plays outside the numbers. He has strong hands and long strides and looks to dive out to make plays on the ball. He can handle himself in tough cover situations and has the speed and play making ability to come down with a catch in a big moment. A physical and athletic player who works hard and has a great work ethic and a will to improv and get healthy and get back to making plays in coverage. A strong player overall who recently announced his commitment to USF.
🎥 https://www.hudl.com/profile/9409894/Nickolas-Tshivuadi

Mario
Williams
WR | 5'11 | 168
Plant City | 2021, 5’11, 168, WR, 2021, Plant City @MarioWill00
Williams is a one-of-a-kind athlete who has terrific athleticism and bounce. He can get up and make plays with ease and shows the speed and twitch needed to elude defenders play after play. An elite playmaker who shows no mercy to defenders and can outplay opponents without giving much thought to it. He weaves his way in and out of traffic and can avoid contact and even run over opponents if he needs to. The kind of player that can seem unguardable at times and those times can seem to stretch on an entire season. Before announcing his commitment to Oklahoma he held offers from Georgia, LSU, Alabama, Florida, Minnesota, Ohio State, Clemson, Texas, Miami, Auburn, Oregon, Notre Dame and Michigan to name a few. 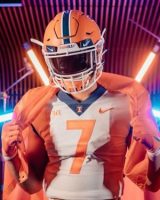