Six Star Football takes a look at several rising prospects that stood out in Orlando. 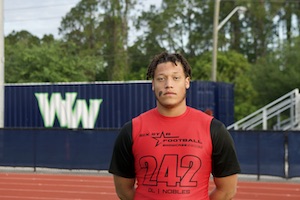 RANKINGS ID COVERAGE | Top DL prospects shine at RANKINGS ID Showcase (2023-24)— We look at some of the  impressive rising defensive line prospects in the 2023-24 classes who made some noise at the annual Six Star Football RANKING ID Showcase on April 9 at Deputy Scott Pine Stadium in Windermere, Fla. 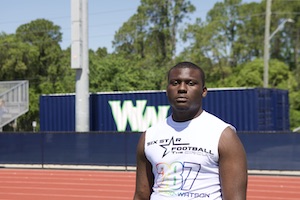 @Marqueilford
With a time of 4.69 in the pro agility Ford-Watson had the third best time among DL at the 6Star Football Showcase in Orlando and his broad jump distance of 8’1 placed him fifth best overall among DL prospects at the event.  Ford-Watson, a 6-1, 215 DL from Melbourne is a player that can also play either DT or Nose Guard, and along with good footwork has some impressive power and toughness to his game as well.  Also was invited to the 6Star Football Finals in Kansas City for his outstanding performance at the Showcase. 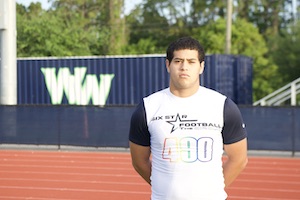 @JadonFrick
No doubt Frick really showed why he is one of the prime speed DL to know in the city of Orlando and had the top time among all DL at the 6Star Football Showcase in Orlando with a time of 4.76 in the 40 yard dash.  Frick also showed nice agility and great feet with the top time among all DL in the pro agility with a time of 4.51. Frick’s broad jump mark of 8’9 was the second best distance among all DL at the event, no doubt a top notch looking athlete that has some major athletic skills that should bode well for a big junior campaign at Boone in 2022. 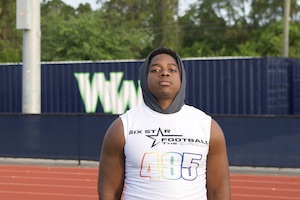 @GregGrace6
Grace is a big man to have on the radar and at 275 pounds was the biggest DL upperclassman prospect at the 6Star Football Showcase. Grace comes out of Lucy C. Laney High School in Georgia and is  a player that has an impressive resume also, Grace is a two-time First Team All-Region selection and was named an two-time All-Area pick as well for a big 2021 season in the defensive trenches. Grace has the versatility to play anywhere on the DL from DT, NG, and DE.   A very impressive looking senior ‘23 DL to keep on the high radar.

@kaysomean6
His time of 4.9 in the 40 yard dash was the second fastest among all defensive lineman at the 6Star Football Showcase in Orlando, and Gustave had a broad jump distance of 8’3 which was the third best distance among DL at the Orlando Showcase. His time of 4.90 in the pro agility placed him among the top 10 for DL at the Showcase. Gustave is a player to have on the DL radar among Orlando senior play makers for 2022.  A player that has worked hard in the weight room and has a nice combination of power and footwork. 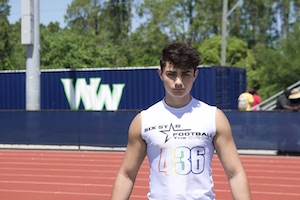 @lugegreg
With a time of 4.28 Luge was the fastest DL in the event at the 6Star Football Showcase in Orlando, and his broad jump distance of 8’9.5 was also the furthest distance among all DL at the event, no doubt Luge is a very impressive athlete that has high expectations from his senior season at Lake Mary in 2022.  Earned an All-American Invite from the event and is a speed DL that can also  lineup at outside backer, one of those edge threats that can close in a hurry and make some big time plays and stops against the running game.

@Zyon_Nobles
Nobles recorded a time of 4.80 time in  the pro agility, good for a tie for fourth fastest time among DL at the 6Star Football Showcase, no doubt Nobles was one of the guys that has a top notch frame, the biggest for length plus power frame at the event among DL, 6-4, 245, Nobles looks the part and plays the part also as one of the top pass rushers in Florida, no doubt a junior to be that is ready to make a bigger and bigger name for himself and jump on more and more college radars with his power game.  We can see why Rhode Island offered Nobles in early December and expect several others to be following up with early offers for this standout DL from Zephyrhills Christian. 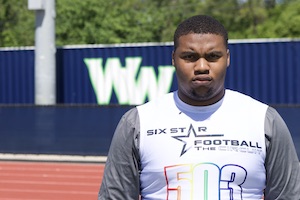 @Micha3l9_
A player that has a nice upside out of Seabreeze, Shropshire is a power player at 6-0, 257 that is hard to handle in the trenches and can take on blocks and win those one on one battles at the point of attack.  Michael is a player that you see being more physical than most guys and has some good moves also  to get by the blocks in front of him and be a guy that can live in the backfield.  Also plays with a high energy level, a player that is a very nice leader to have and plays with a fiery edge that is hard to find among big men. 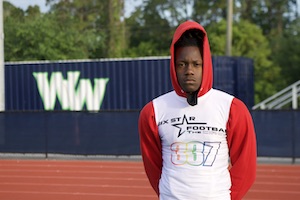 @nategocraxy
Had a 4.91 time in the pro agility good for a top 10 mark among DL at the 6Star Football Showcase in Orlando,  White, 6-0, 210 out of Freedom High, is a player that has very active feet and footwork from his DL spot, one of the hometown players that stood out as a good athlete and player to keep on the next level radar, White is a good play reader and knows how to read and react quickly to plays and be a nice speed play maker on the edge for Freedom. 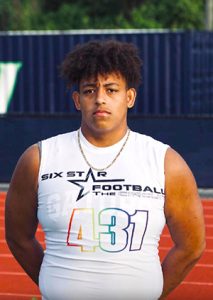 @Dyoung236
Young will look to have a big junior season in 2022 for Everglades High School, a good looking power frame and one of those guys that will look to use his 213 pound frame to push guys around and be a run stopper up front for Everglades.  Has worked very hard in the weight room and it shows, one of those physical play makers on a defensive line to keep an eye on for a big junior campaign in 2022.  His game will be power and strength and one of those DL that will look to dominate up front and be more physical than the man across the line from him.