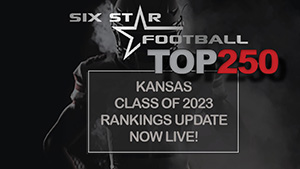 With high school football season gearing up for a return to the field, Six Star Football is releasing the TOP250, a comprehensive rankings update for the rising 2022 class. The rankings feature 250 prospects,  as well as several other athletes on our watch list.

ABOUT THE TOP250
Six Star Football has the most comprehensive position ranking and analysis in the business with 250 players ranked throughout Kansas that includes scouting reports, analysis and other vital information for every prospect.

NEXT TOP250 UPDATE
The next Six Star Football TOP250 rankings update is scheduled to take place after the spring camp season.

HOW TO BE EVALUATED FOR THE TOP250
Rankings and stars are assigned based on the evaluation of Six Star Football’s scouts in each state. They are not for sale and are not assigned to subscribers or athletes in any organization or program. Athletes can ensure they will be evaluated in person by attending a Six Star Football Showcase event. Attending an event does not guarantee a ranking, but all prospects will be evaluated and receive a profile in the TOP250 Database.