State’s No. 10 ranked player in 2023 class chooses MU over a host of programs. 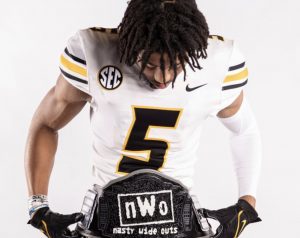 State’s No. 10 ranked player in 2023 class chooses MU over a host of programs.

The hits keep coming for Mizzou head coach Eliah Drinkwitz, who continues to build a stable of talent with strong recruiting classes since taking over the program in December 2019.

On Friday, the Tigers’ 2023 class got another boost as he landed a commitment from the state’s No. 10 ranked prospect as Lee’s Summit 2023 Joshua Manning (

@joshmanning121) chose the Tigers. Manning held 20 offers prior to his commitment, including Stanford, where his father Brian Manning played. He eventually narrowed his list to three, and chose Mizzou over Kansas State and Arkansas.

An explosive athlete, Manning shows great verticality, physicality, speed and agility, and great hands. At 6’3, 195-pounds, he is a true playmaker that blew up last after missing his sophomore season to injury. As a junior, he caught 69 passes for 900 yards and 11 TDs and drew the eye of college programs across the country. 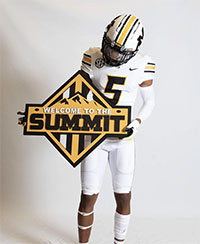 “He will put the team on his back,”  Les’s Summit WR coach Chris Stehle said. “He does what it takes to win whether that is catching a deep route, screen plays, or blocking someone to free up a teammate.”

Manning was not only an all-state receiver and return man last year, but competed for the Lee’s Summit basketball team in the winter and the track and field team in the spring, where he was a multiple all-state performer as he finished as the state runner-up in triple jump and long jump. Manning briefly held the Class 5 record in the long jump (24-5 3.4) before Joplin’s Donavyn Fowler broke the mark a few minutes later.

On Friday, Manning told Six Star Football in an interview his decision to choose his home-state Tigers came down to staying in-state and playing with his older brother Micah Manning, who  transferred  to Mizzou from Iowa Western during the offseason. Manning says he was impressed with the MU athletic facilities and wanted to be a part of what is brewing in Columbia.

“They had amazing facilities,:” he says. “One of the best that I’ve been to. I felt like they are on the rise and I felt that in the culture there. I think the program means a lot to the state and I feel like they’ve been waiting on Mizzou to start picking it up again.”

Manning was primarily recruited by receivers coach Jacob Peeler who tweeted after Manning announced his commitment, “That dude that just committed is a DUDE”

Manning said getting to know Peeler was a big part of his decision to commit to the program.

“That was very important to me,” he said. “We had a great relationship” 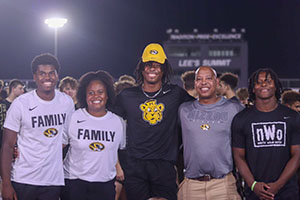 “He can blow the top off the defense, has reliable hands, and great top end speed,” Stehle says. “He can also get you the tough yards when you need them and isn’t afraid to lower the pads when needed.”

But Stehle says Mizzou is getting more than just an elite prospect with a world of potential on the football field.

“Josh is a humble kid that is a genuine leader and a great young man all around,” Stehle says. “In the classroom Josh is a bright young man with great academics and a leader in the building.

“He truly embraces the role of student athlete”.

For his part, Manning says he just wants to win and be a part of building something special in Columbia.

“They’re (MU) getting a playmaker and they are going to get 100 percent out of me every day,” Manning says. “I just go out there and have fun!  I’m looking forward to turning the program around that’s for sure.”