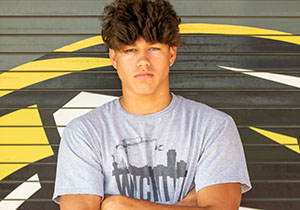 RECRUIT MIZZOU  I  Tigers in early on elite 2024 TE target

It’s potentially a match made in heaven: Raymore-Peculiar 2024 Jaden Reddell

@JadenReddell) loves the University of Missouri and the football program.

The Tigers have Six Star Football’s No. 1 ranked TE in Missouri’s 2024 class high on their board as well — some reports have indicated he is one of their top TE targets in the class of 2024.

But after suffering an ACL injury late last season, Reddell’s recruiting has hit what is likely to be a temporary hiccup. He recently picked up his first offer from Colorado State and hopes the Tigers pull the trigger soon as well.

“I have heard that I am high on their TE board and it means a lot that they see me as someone to recruit and give effort into recruiting me,” Reddell said. “It would be great to get a offer from my Mizzou — my home state team, because I love the school and I love the coaches.”

Blessed with terrific size at 6’5 and a projectable, athletic frame, Reddell is an athletic downfield playmaker who continues to grow. He went from 205 pounds a little over a year ago to weighing in at 225 recently, without losing a step. Reddell ran a hand timed 4.41 40-yard dash at summer workouts on Thursday at Raymore-Peculiar  — an eye-popping number that is turning heads and should put any lingering concerns about his injury to rest.

“My recovery has gone great and I feel better than ever and I am ready to be back and compete,” Reddell said.  “I do feel that my injury has set my recruiting back some because of what coaches have said to me and how they wanna see how I come back before recruiting me as they would if I didn’t get injured.” 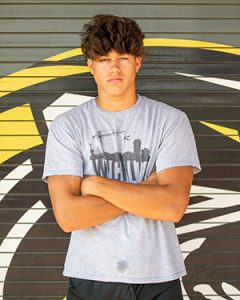 A year ago, Reddell mostly operated out wide, posing a huge mismatch on the edge as he was simply too big and too fast for most high school defenses. This year, Reddell figures to make a transition to more traditional tight end role, still able to make plays in the passing game, but better equipped to block and spring Ray-Pec backs in the running game.

“My game is about running great routes with speed and being able to jump over people to catch a ball, but this year I am playing more tight-end so my blocking will improve and help the team in the run game,” he says.

Reddell took an unofficial visit to Columbia in late April and walked away impressed. The trajectory of the program under head coach Eliah Drinkwitz isn’t lost on Reddell who says he is friends with several highly rated prospects the Tigers appear in on.

“Their facility is great and their program they run seems very advanced and shows how they care about the athletes,” he said. “ I think the Mizzou program is really going to thrive these upcoming years because they have showed they are a good team and have a great environment to be around with the coaches and team.

“I know some friends that are getting recruited by Mizzou and a couple who go there.”