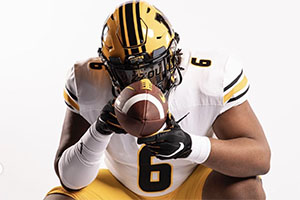 A year ago, the Missouri Tigers made waves when they landed East St. Louis 2022 WR prospect Luther Burden

Luther
Burden
WR | 6'0 | 180
Cardinal Ritter | 2022 — widely considered one of the nations’ elite prospects and a huge get for the Mizzou program.

Today, the Tigers remain in the mix for one of the nation’s top offensive tackle prospects.

@McVayMiles), a talented 6’7, 330-pound lineman, will be in Columbia today for an unofficial visit and by all accounts, things are looking good for head coach Eliah Drinkwitz and the Tigers.

McVay has long been considered one of the top OL prospects in his class, and burst on the scene for football powerhouse East St. Louis as a ninth-grader. He has drawn interest and offers from virtually every college program imaginable, and held 45 offers when he recently narrowed his list to six as he announced his commitment date. McVay has Mizzou listed along with Alabama, Michigan State, Oregon, Texas A&M and Jackson State.

He will be making his decision on August 11 and says multiple factors went into narrowing his list. 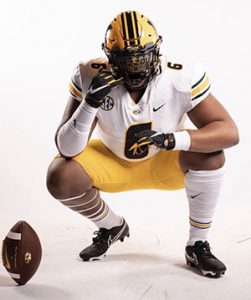 “What helped me break it down to six, was the relationship with the coach, the culture of the schools and the programs, offensive fit, traditions of success and true consistent attitude of the coaches and interest in me,” McVay told Six Star Football in an interview on Wednesday.

Blessed with a huge frame and quick feet for a big man, McVay brings terrific technique and understanding of the game to the field. But his best attribute might be the attitude he plays with.

“My game is nasty,” he says. “I block to the end of the whistle and I will finish you by allowing you to feel how much I truly weigh in pads. The next part of my nastiness is understanding the game and defenses — I like to let defensive coordinators know not to challenge me. I also like to defeat my opponent by taking their spirit.”

Today’s unofficial won’t be the first trip for McVay to Columbia. His dad is an MU alumnus and he was introduced to the Tigers at a young age and has been attending camps at Mizzou since he was seven years old. McVay was in Columbia for an event that was held for the Tigers top recruits in late June and says he is considering taking an official visit to the school in October.

“Being close to home and having so many players I know on the team stood out to me,” he says. “The Tigers are headed up, I  love what Coach Drink is doing, how he is creating a new culture and building new traditions at Mizzou, those things are what will take Mizzou to the next level.”

The East St. Louis relationship with Mizzou goes way back to NFL Hall of Fame tight end Kellen Winslow and includes the likes of Terry Beckner, Burden and many others. McVay says the relationship between East Side and Mizzou has only grown under Drinkwitz. 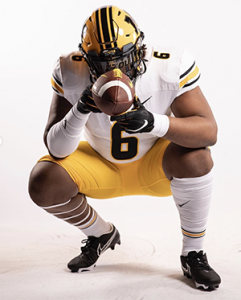 “He has continued the relationship and built a better relationship with the players in metro area as well as from East Side,” McVay said. “Now as you see the success of your teammates it gives you a better feeling that you will be successful. And you trust Mizzou will develop your game, allowing you to compete, allow you to get the degree you have always wanted, and help you develop as a man.”

McVay says he has been recruited at Mizzou by assistant Kevin Peoples and assistant head coach and offensive line coach Marcus Johnson and says he has enjoyed building a relationship with both coaches.

While the NIL opportunities have become a major factor in college football for star recruits and players, McVay says it’s not a deciding factor in his decision.

“The other parts of the school and program culture mean more to me,” he said. “My parents are handling the NIL side and that leaves me free to choose the school based on where my heart leads me.”

Aug 11 a special day for McVay and family
McVay is using his commitment to both honor his mother and to help others. He says he chose his mother’s birthday as the date to announce his decision, and is using an event that is sure to draw a lot of local and national attention, as an opportunity to help school children.

McVay is encouraging attendees to bring school supplies to donate to the Little Bit Foundation and the Terrance Sheard Foundation.

“I wanted to give her a special gift and have her share in my commitment,” he said. “Also she says to me the best gift you can give is the gift of giving. That’s why we are asking for everyone to bring a school supply to donate.”

Jackson State makes the final six
It hasn’t been that long ago that Jackson State would have been an afterthought for an elite recruit like McVay. But things have definitely changed under NFL Hall of Famer Deion Sanders who has taken the Mississippi HBCU into college football relevance in ways that would never been thought imaginable until he arrived at the Jackson, Miss. campus.

“It’s the culture and the history of Jackson State,” McVay says. “Then you add a great coach like Coach Prime that has the experience on some of the biggest stages and has desire to make you and everything around you great and it is instant love.

“Plus seeing how Jackson State can offer you everything the Power 5 schools can offer it shines a whole new light on HBCUs.” 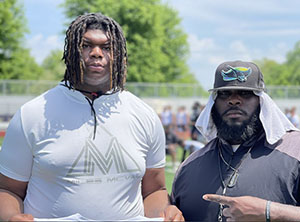 Also a native of East St. Louis, Poe is widely considered to be among the top trainers around and McVay picked up on that right away, even at a young age.

“I got to work with coach Poe one-on-one for the whole camp,” he said. “I loved the way he challenged me with learning new techniques and I believe he was impressed with how fast I learned.”

McVay was on hand to support Poe this spring at the Six Star Football St. Louis Showcase at Althoff Catholic High School and spent the day helping coach up the offensive linemen at the event.