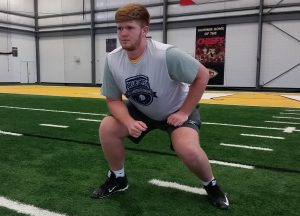 Park Hill South 2018 Ben Becker has emerged this summer as one of the Kansas City area’s premier offensive line prospects.

At 6’5, 275 pounds, Becker plays with an aggressive mentality, brings leadership and focus to his team, and admittedly doesn’t make many friends on the field between whistles.

He helped lead Park Hill South to a 10-2 record a year ago, including a tough 24-23 loss to rival Park Hill in which Becker played well in front of a host of scouts. Park Hill South rallied from that early season loss to win eight straight game before falling in the Class 5 playoffs to Staley.

This year, the team is replacing several key seniors, but return four starters on the offensive line.

“We lost a lot of crucial seniors that could change the game with one play,” Becker said. “But we will be strong in the trenches.”

Becker has attended several camps and combines this offseason and is working on his pass blocking.

He says he started playing football in second grade for the Necco Raiders.

“(The Raiders) were a very special program that taught me how to work hard and the importance of tradition,” Becker says.

He has tried to model his game after Cam Robinson, a former Alabama offensive lineman who plays with aggression and with a big motor.

He has drawn interest from a host of colleges this offseason and at last report held offers from Air Force, Missouri State, Western Illinois and Central Arkansas.