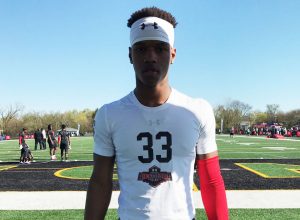 A match-up nightmare at 6’4, 185-pounds, Massey is fast and quick, but also brings size and a physical style of play. He can out run a defensive back, or jump up and high point the ball.

A year ago, Massey put together a big season for a young Francis Howell North squad, leading the Knights with 63 catches for 930 yards and 10 touchdowns.

“What I bring to my team is a versatile athlete and a great role model and I’m the one to go to in clutch situations,” Massey said.

“This season we are going to be great,” Massey said. “Last year we were 6-5 and no one was expecting us to do that with a new coach and all, but this year we’re top contenders.”

As he gears up for the 2017 season, Massey says he is working on double move routes.

“I like breaking people off and hearing the oohs and aahhs,” he says.

Massey said the first official team he ever played for was the Mid River Eagles when he was in fourth grade. The team was among the best in the nation as seventh- and eighth-graders.

“We had a lot of talent and a great coach,” Massey said.

Massey has heard from a whole host of schools and already has offers from Iowa, Iowa State, Bowling Green, Boston College, Illinois and Lindenwood.