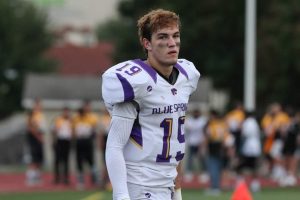 BLUE SPRINGS, Mo. — Blue Springs 2018 Nick Hessefort is earning a reputation as one of Kansas City’s premier defensive back prospects.

A long, rangy 6’3, 180-pound defensive back, Hessefort plays fast and focuses on the little things to make plays. He is one of numerous talented players on Blue Springs who are among the state’s premier teams with high expectations for the upcoming season.

“We are chasing a title with a little something different this year,” he said.

After playing safety earlier in his career, Hessefort anticipates playing more corner this season and has been focused on the transition and technique.

Hessefort began playing football as a youngster and says starting at a young age helped him learn the game along the way.

“It makes a big difference,” he said. “It teaches you a lot of life lessons, starting young.”

Hessefort says a lot people have helped play a role in his success throughout his football career to date.

“Anybody who has supported me and always believed in me, that’s what life’s all about is the people who show you love,” Hessefort said.

Hessefort says he enjoys watching Desmond King, a corner back for the Chargers, and Jaylen Mills, a cornerback for the Philadelphia Eagles.

He currently holds offers from Missouri Western, Southern Illinois, Missouri State, Western Illinois and North Dakota, but says he is focused on a special season with his high school team for now.