Marquette emerging as target for Division I programs, recently picked up first offer. 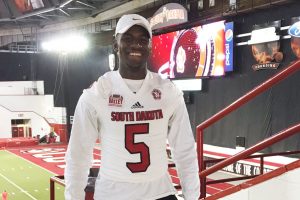 Marquette 2018 Wendall Bronner Jr. has emerged as one of the St. Louis area’s premier playmakers this offseason and recently picked up his first Division I offer.

At 6’0, 175-pounds, Bronner is a finesse, hard-nosed athlete who brings a good work ethic and attitude. He is an explosive player who can play any skill position on the field.

“I also bring leadership,” he said. “The biggest thing I bring to my team is my ability to compete with everyone.”

He rushed for 317 yards and three touchdowns last season, and caught 13 passes for 168 yards as he helped the Mustangs put together an 8-3 record.

He says the Mustangs most important game last year was a 28-20 win over Lafayette in week 6.

“It was a rivalry game we had not beaten them in years,” Bronner said. “We gave up a touchdown on the opening drive. Our team never put our heads down. Start of the second half I scored a 80 yard touchdown reception down the sideline. Biggest play of my high school career. It gave our team so much more momentum to finish the game.”

Bronner is one of only two returning starters on defense, but on offense the Mustangs return its entire offensive line.

“Summer camp should be the best it’s ever been knowing that everyone has a chance for a starting spot,” Bronner said. “For my position I’m working on consistency. Running routes a certain way. Being able to go hard on offense and defense and make big plays on both sides of the ball.”

Bronner started playing football when he was 7 years old as he competed for the Matthews Dickey Bulldogs, a league where the inner city kids played.

He says his brothers have been the most influential in his football career.

“They were big time high school football players and they primarily taught me the ins and outs of what I needed to know of this game called football,” Bronner said.