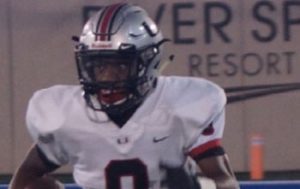 Tory DillardTory
Dillard
WR/SB | 5'9 | 166
Broken Arrow | 2020
@t_dillard1
Meet one of the most talented and driven receivers in Oklahoma, Union 2020 junior and team leader Tory Dillard, a player that makes plays for his offense and a player that is primed for a fine senior campaign. The elusive and quick wide out, is a very tough player to tackle and has great ball skills which is already making him an attractive prospect for several colleges at the next level.

Six Star Football – What did you improve upon

Six Star Football -teammate that could be star at next level

Six Star Football -Player to keep an eye on