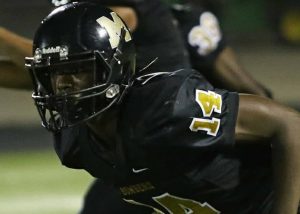 Every coach and every teams dreams of having a player like Kobe Washington of Midwest City. Not only is he a big time hardworker, but he is a player that makes it a priority to pay attention to detail and is a player that just always tries to learn techniques that will help in him to be the best player he can be a doing his job for my team.

The athletic Tight End has proven to be able to making would be tacklers miss and get extra yards . He has been very confident in his route running and athletic ability to make a man miss or run past them especially with all the mismatches he got at Tight End. Kobe posted 26 receptions for 380 yrds and 7tds. Career high in single games is 6 receptions for 123 yrds and 3 tds. NEO, UCO, OBU, and ECU have all shown interest in Kobe.

Six Star — What camps have you been to

Kobe—I’ve been to the OSU camp and Tulsa camp last summer since I just started playing football my junior year I’ve tried to get myself out to colleges more . My summer camps could’ve been better I just had came of some injuries . I’ve improved since then, I learned about the pace and what’s expected out of you in college.

Kobe—My senior season was great we did a lot good things and some bad, but we never gave up. I would say I didn’t start the way I wanted to but I finished the season pretty good still have things I need to improve to get the job done effectively in college.

Six Star — What do you feel you have improved upon

Kobe—I feel like I improved a lot in my route running and athleticism I still need to work on being more aggressive in every thing I do to take my game to the next level.

Kobe—I’d say my brother he influences me a lot he’s at NEO right now.

Kobe— I had was definitely against Sapulpa in the first round of playoffs I was blessed to have scored 3tds .

Kobe—was when I squated 315 my first year playing football as a junior.

Kobe—I’ll say a player to watch is Shemar Moore OLB class of 2022 he has great size for a freshman, he started and contributed real well for us in the playoffs he’ll definitely do big things if he keeps it up .