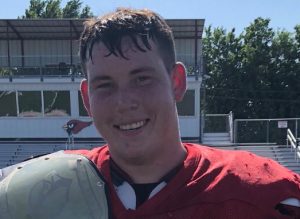 @carneyman55
One of the hardest working players you’ll find, Collinsville High School’s Adam CarneyAdam
Carney
NT/T | 6'2 | 250
Collinsville | 2019 also is a strong and powerful kid who power cleans 300 and squats 425. A dedicated and a hard-nosed player that goes all out between the whistles with 6-2, 250 pound frame that could pack on more at the college level.

Should be on the radar for colleges to take a look at with his great work ethic and has the right attitude to take his game to the next level. Is talking to NW Oklahoma State, SW Oklahoma State and attended both camps as well as
Pitt. State camp. Be sure and keep an eye on this NT/T.

Six Star —What schools have shown the most interest in you

Six Star —What camps did you attend and what skills did you improve the most upon during the off season.

Adam — I travelled to SWOSU,NSU, SWB, Pitt State and a few others I took away that I needed my hands to work on and speed and footwork is key, I improved on my lifting, form, and definitely my hands

Six Star —What is your pregame ritual

Adam — I usually work on homework before games, can’t be a student athlete without being a good student

Six Star —Players to keep an eye on