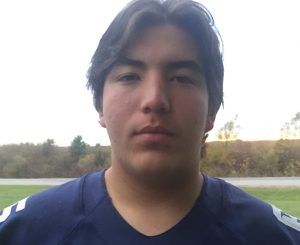 @mmsbulldog70
Looking for a brutally strong offensive lineman who can move the pile and be a punishing run blocker, look no further than Minco, Oklahoma, where you will find 6-2l 290 pond Aidan Howry

Aidan —J.R. Conrad is the most influential person I know.

Six Star —What did you improve upon the most this summer

Aidan —This summer I spent a lot time in the weight room and running stairs. Had a great camp at the Tulsa Friday Night Lights camp and had a great learning experience at the Eastern Oklahoma O-line and D-line camp I was honored to receive the down and dirty lineman award.

Aidan —I also attended a few other camps such as Emporia State and Oklahoma Baptist University. Things I’ve gotten better on this off-season one of major things would be my hand speed and technique. Also my overall IQ of the game increased during the off-season

Six Star —What colleges have shown you the most interest

Aidan —I’ve mainly been getting camp invitations and coaches following me on Twitter.

Aidan —My main pregame ritual is eating Swedish fish and listening to biggie smalls. Also praying for about 15 minutes

Aidan —My favorite class is English.

Aidan —My best game was against Wynnewood in week 0.

Aidan —My biggest weight room accomplishment would be 595 deadlift in my first meet as a freshman.