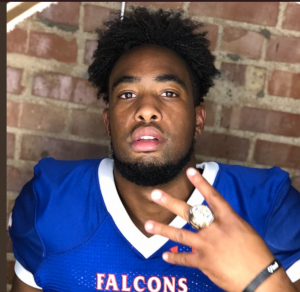 With two state championships already on his resume, Millwood linebacker Alijah BrisonAlijah
Brison
MLB/DE | 6'1 | 220
Milwood | 2019 has helped the Falcons to an 8-0 record and appear poised to run the table once again.

At 6’1, 220-pounds, Brison is fast, physical middle linebacker who makes smart decisions and flies to the ball.

He spent the offseason attending camps at East Central and Central Oklahoma.

“I learned to be more patient with my reads and that even though I make some mistakes I go 100 percent while making them and that my effort is appealing to coaches,” Brison said. “The things I most improved on had to be my pass coverage and tackling.”

He currently holds offers from ECU and SWOSU and has drawn interest from Langston University, Arkansas Tech, Yale, Cornell and Princeton.Six Star Football recently caught up with Brison and asked him about his senior season.

Alijah — Had to be my oldest brother , he’s accomplished so much at a young age and he really set the example for me.

Alijah — My pregame ritual is pretty simple , it just consists of getting a few quick stretches in a prayer and finding somewhere to be alone so I can listen to music and zone all the way in

Alijah — My favorite class has to be history, I like learning about the things that shaped our world into what it is today.

Alijah — My best game was the state championship my junior year I started off slow but picked it up and help shutdown one of the best rushing teams in the State.