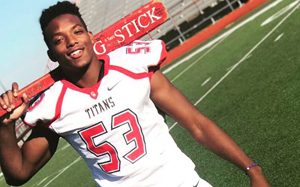 One of the most impressive young athletes and DE you will find is an up and coming star at Carl Albert High School…Meet Alphonse Joseph, a class of 2020 future terror on the DL. He plays veryt quick and is a threat to the offensive line. A player that will wear you out until you can’t block any more if you don’t get off the ball fast enough Joseph is already behind you.

Six Star football – What did you improve upon during the offseason

Six Star football – Teammate to keep an eye one