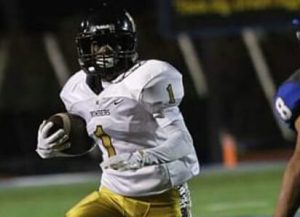 Look for him to for sure be one of the best WR prospects in the state for the 21 WR class.

Six Star — What did you improve on the most this season

Andre—My parents have been the most influential

Andre—I didn’t go to many camps this summer

Six Star — What schools are looking at you

Andre—I am not sure what schools are interested at this point.

Andre—I just turn my music on and chill take laps before the game and run some routes.

Andre—In my career would be when we played Bentonville because it was my first Touchdown.

Andre— would be improving my squat

Six Star — Teammate to be a likely college star would be

Six Star — Players to keep an eye on?