McGuinness Chambers defies the odds with emotion/intensity at DE spot 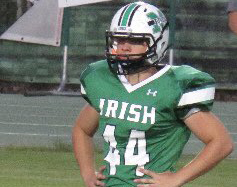 Andrew
Chambers
DE | 5'8 | 175
Bishop McGuinness | 2021 uses his speed/quickness off the edge along with a high motor and a lot of emotion and is a player who looks to revolutionize the position of DE to show you don’t have to be 6’3 and above to play at a high level.

Andrew- the most influential person to me would be Kobe Bryant… even though he is a basketball player his work ethic and passion influence me to do the same except in football.

Andrew- I work out usually twice a day in the summer lift in the morning speed in the afternoon. Have not attended any camps yet.

Andrew- definitely the best thing I improved would be my discipline to not jump offsides and cause penalties as I did not once this year.

Andrew- biggest weight room accomplishment would have to be squatting 405lbs

Six Star football – Teammate to keep an eye on

Andrew- player to keep an eye on would be Cole Limber