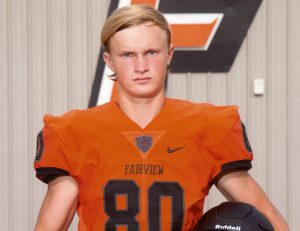 @Drewhouk80
One the smartest and most productive defensive players you will find has been at Class A Fairview. Junior standout Middle LB Andrew Houk has been a force and the man in the middle to make foes fear running up the middle vs. the Yellowjackets.

Houk is an excellent play reader and he trust his reads to take him to the tackle. “Trusting my reads has helped me to earn 319 tackles in two years as a starter with years of 150 tackles and most recently 169.”

Andrew—This summer I had the opportunity to attend the Blue and Grey Combine in Oklahoma with a teammate and I really enjoyed my experience and being able to pick the brains of the linebacker coach there to improve myself. I improved my game in the mental aspect as well as the physical aspect but I really worked on the mental side. Behind undersized for a linebacker, it is important to do every little detail right and perfect so that I can benefit my team the best way I can.

Andrew—I have not personally receive any college interest, but my coach told me that Rice University contacted him about me early in the season.

Andrew—get stretched my strength and conditioning coach, Coach Nelson. Favorite Song: I don’t really have one, I just like a lot of genres

Andrew—My chemistry class with another one of my football coaches because he is just super chill and he’s a great teacher.

Andrew—Second round playoff game against Cashion. We got our school’s first win in history against them and I had 20 tackles in the first half, ending with 30 or more

Andrew—I actually have three. Chad McGolden, Kade Dillard, and Zach Ramay. Kade is an outstanding quarterback and Chad is an amazing receiver. Zach is one of the best punters in the country as well.

Andrew—is probably Kade Dillard. He’s always pushing himself and others in the weight room as well as on the field. He expects nothing but the best from everyone around him.

Andrew—Brody Wills. He’s really athletic but just has a few quirks he needs to work out in his game. He should really be a great football player soon