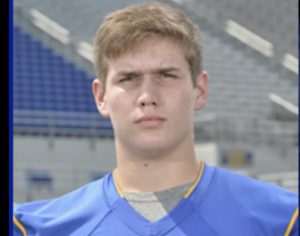 @andrew19147
Every big time team has to have a player of Andrew Winn’s caliber. The first team all-conference fullback/tight end is the type of player that is a very physical player who just makes his opponents want to quit. He brings it play after play and you better strap it up because it’s going to get rough.

Andrew—The best game I’ve had is the first game of senior year. I had 6 catches for 33 yards and 2 scores. I also had 7 pancakes blocking

Andrew—I improved in the weight room and got faster on the field.

Andrew—My mom has been my most influential person in football and in life. She’s been to every game she possibly can and always helps me with everything.

Andrew—I didn’t have any camps to attend in the summer, I was just in Stillwater working full time and going to football everyday.

Six Star — What colleges have looked at you

Andrew—No colleges have looked at me that I know of.

Six Star — Most people who don’t know this but I:

Andrew—I usually go home and hangout with my brother, ben, and then go get hyped up in the locker room and get ready to roll.

Andrew—Masonry which I take at meridian tech in Stillwater. It is my first two periods.

Six Star — Teammate that could be a college star

Six Star — Everyone needs to watch out for

Andrew—is either Ty Boone, another fullback, or Hazer Xander’s