Rankin, a player that can do it all equally well on both sides of the ball 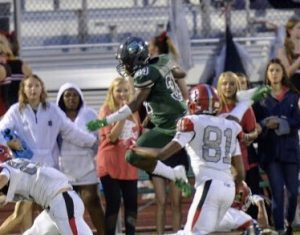 That takes a special talent, a special talent like Angelo Rankin, young and already making a name for himself on the talented Santa Fe program. A lot of times you say the future of a team is in good hands because of certain players and this is for sure the case with Santa Fe and Rankin. They have him for two more seasons and he already has some tremendous games and confidence under his belt.

Angelo—I can always get better at everything but mainly focusing on the mistakes I made and the position itself and knowing it.

Angelo—That’s hard so many people but my mother and my close family, friends and my coach’s

Angelo—I went Adidas and a couple little camps, but I learned I need to improve on my speed jumping and also learned what I need to do to be great.

Angelo—My goal is to go D1 of course, but I will play for anyone who is gonna give me the chance. I am always working on my craft in some type of way

Angelo—I am just focusing and getting hyped for the game

Six Star — Teamamtes to keep an eye one