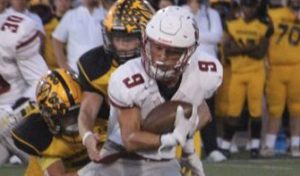 Style of play
Donald – I’m more of a speed type of player. Take the wrong angle at me and I can leave you real quick. Also, If I see an opening I’ll cut up field immediately.

My most influential person
Donald – would have to be my mother. She’s always been there for me, pushing me to become better at every sport. She’s taught me to be a better man among other things.

My most influential coach
Donald – would be Coach Reed. He’s helped me with my footwork and technique ever since he got to the high school. He’s pushed me to rise to the challenge and reach for greater things.

Goals for offseason
Donald -My goals in the offseason are to get faster and stronger. I have to put some more weight on me. Even though I’ll be running track, I’ll still be lifting weights every chance I get. I also need to work on my technique some more, including footwork.

My most memorable game
Donald – would be the game against Altus last season. It was a great game, I had fun playing defense that game. Playing down in the box and getting to be closer to the action and rack up the amount of tackles I did.

College interest
Donald -I’ve really been looking at OU for college. But, a school that can offer me a scholarship while also having a good engineering course there would be great. I would like to pursue engineering in college as well as play football.

My pre-game ritual
Donald -is where the whole team sits in the locker room 2-3 minutes from the start of the game with the lights off. It’s a time to reflect over the week of practice we just had and how will we use the techniques that we learning in tonight’s game. It’s all about getting your self mentally prepared to go out there on the field and show everyone what you got.

My favorite song
Donald – would have to be “The Box“ by Roddy Ricch.

My favorite class
Donald – is engineering/pre-calc/pre-trig at SOTC. It’s a trade school of sorts, and I’m going there for engineering.

My favorite NFL player now
Donald – is probably Lamar Jackson, I like his style of play and he reminds me of Michael Vick.

Favorite NFL player as a kid
Donald – I liked Michael Vick. He was so versatile and fast. I loved watching his plays.

My biggest weight room accomplishment
Donald – would be when I finally hit 300lbs on squat. To me that’s a big deal. As small as I look, you would think I’d wouldn’t be capable of that.

A teammate that could be a star at the next level
Donald – would probably be Derick Peters. He’s a great athlete and one of the most talented DBs we had, he has the desire to win. He never gives up on a play. He’s a senior now, this was his last season. I hope he goes somewhere good and shows out there.

The hardest working teammate
Donald – would be Preston Pickens, he’s a dog. He will push you to get better and while doing that he’s getting better too. He never gives up and he’s one of the hardest hitters on our team.