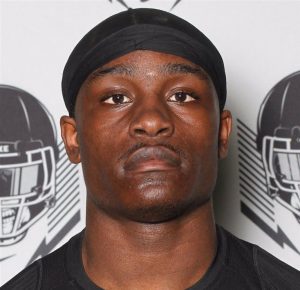 @MrAfriicaa
Arich is a player that goes all out and he brings a level of intensity and aggressiveness that can’t be taught. He is a football player true and true and his style of play is one that puts him as the top of the game and makes him one of the top Outside Linebackers in Oklahoma.

The Putnam City West senior is a veteran who has a lot of great experience and knows how to deliver the knock out blow on runners and receivers alike. He has been the defensive team leader for the Putnam City West Patriots and is a player that has all the skills to be a major factor at the next level.

Arich — I went great, I improved my quickness and got a little stronger for the next level.

Arich — My mom, Everything I do is for her.

Arich — I went to Rivals and the Opening, both were great experiences on seeing how I looked against competition.

Six Star —What schools have shown the most interest so far

Arich — I’ve gotten interest from D2 schools and some D1’s. Arkansas-Pine Bluff has already offered me and I feel like Kansas State is interested in me.

Arich — No Hook by Lil Yachty

Arich — Against Putnam City North sophomore year, I almost had a pick 6 and I caught a TD and made a few tackles as a sophomore.

Arich — Squatting 315 as a sophomore

Six Star —Teammate to keep an eye one