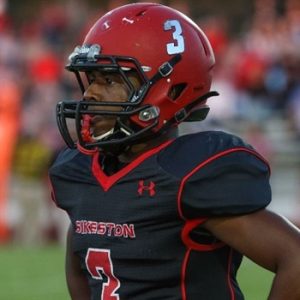 One of the premier players in southeast Missouri, Sikeston 2018 Austin Branch is making a name for himself as a playmaking corner.

At 5’11, 170-pounds, Branch is a high football IQ corner back who helps his teammates line-up on the defensive end, and makes plays at wide receiver on the offensive side of the ball.

“I usually know where everyone needs to be and most of the time I know what play is coming,” Branch said. “So I try to put my teammates in a spot to make a play.”

Sikeston is young, but plenty talented and Branch says expectations are high entering the 2017 season.

“My teammates work extremely hard so hopefully their work ethic makes up for a lot of things,” he said.

This offseason, Branch has been working on his footwork, speed, breaking on the ball, and open field tackling. And as an inside receiver, he is working to improve his route running and catching.

Branch began playing football when he was 8-years old in Jackson for the JAYF program and says his father has had the biggest influence on his football career to date.

“He played college football so it was always something we talked about,” Branch said. “He coaches me up when I’m at home.”

A fan of the Seattle Seahawks’ Richard Sherman, Branch says he appreciates the Pro Bowler’s confidence.

“His attitude towards the game is eye opening,” Branch said. “We also play the same position so I try to resemble him in every way.”

Branch says he has heard from several colleges and that Rhodes College has shown the most interest.

He has also heard from NCAA Division II programs Lincoln University and Lindenwood.

“More schools are starting to contact me and stuff,” he said. “My film has finally started to get out there so more coaches are reaching out to me.”