COLEMAN MAJOR DISRUPTER UP FRONT FOR BEGGS IN '23 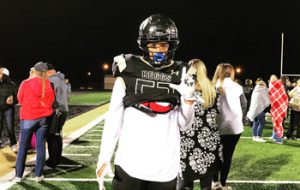 Style of play
Tayden – I’d describe my style of play at the defensiveness position more of a quick skill defensive end I like to use my hands and foot work to get passed the offense.

The most influential person
Tayden – to me is probably Yetur Gross-Matos because him and how he came up and by passed all the adversity and became a great defensive end at the college level.

Most influential Coach
Tayden – is my head coach coach Tennison me and him at first didn’t see eye to eye but later on I learned that I must be coachable if I wanna make it to the college level and that I’d have to respect him after that me and him have been good ever sense hes coached here he’s thought me how to be a good football player on and off the feild and is always pushing me to be better.

A relative that I have that’s a good athlete
Tayden – is my cousin Elijah Smoot he is in a jr college right now but has great potential to go D1 and beyond.

My goals in the offseason
Tayden – is to get leaner faster and stronger I’ve been running and lifting a lot and have been on a meal plan to stay ready for next season.

My most memorable game
Tayden – was or game against one of the best teams in our district and the Dline wasn’t expected to do good that game and I ended the game with 10 tackles 1 forced fumble 1 sack and 3 tckls for loss.

Tayden – Before every game I walk the field eat a good meal and say a prayer in the end zone before kick off.

Favorite song
Tayden – before a game is probably flash out JayDaYoungan.

My favorite class
Tayden – is Algebra 1 because it’s pretty easy to me.

Favorite NFL player
Tayden – in the NFL is Jadeveon Clowney for the Seahawks.

My favorite NFL player as a kid was
Tayden – Dez Bryant.

My teammate likely to be college star
Tayden – Kendal Daniels

Player to keep a eye on
Tayden – is my little bro red Martel.