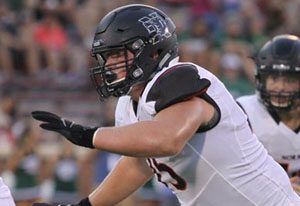 @ben75sparks
Looking for a dominate big man on the OL that has started every game since his Sophomore year and is a force to be reckoned with. Look no further that Norman High School’s junior standout OL Ben SparksBen
Sparks
OL | 6'4 | 290
Norman | 2020.

Sparks, who went on an unofficial to Tulsa and has talked to some coaches from Harvard, benches 290, squats 435 and is one of the stronger players you will find.
Ben also has earned All-Moore Norman Area first team for the Norman Transcript. His style of play is just trying to move someone from A to B and open up run lanes or give his quarterback time in the pocket so we can be successful and he does a great job of that.

Ben – I went to a camp at Northeastern State and a visit to Tulsa and enjoyed my time at both places. I definitely improved my footwork and my technique overall

Ben – I have talked to coaches at Tulsa, Chicago U, and Harvard

Ben – Just sitting in my locker with my headphones on listening to music, sometimes just getting in some last minute film on who we’re about to play

Ben – I deadlifted 500 lbs for the first time, even though I’m going to keep improving on everything in the weight room, but that’s probably the biggest accomplishment so far.

Ben – Best game was against Edmond Sante Fe because we were an underdog in the game and we came out and won to clinch a spot in the playoffs. Most fun football game I’ve ever been apart of.

Six star football – Teammate to keep an eye on