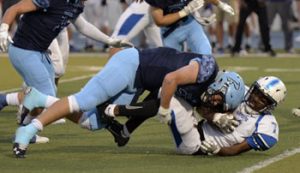 @BraedenWinters
Meet a big and tough nosed LB who shows a lot of talent in the middle of the Bruins defense, only a sophomore this past season. The Bartlesville Bruins expect some big things in store for the next two years from the talented Winters. The 6’2 ,225 Sophomore inside linebacker had 90 tackles, 2 sacks and 6 Tackles for losses, including 6 PBU. Also a great student, Braden has a 3.7 gpa with honor classes. He also received linebacker of the year award for the team and plays some TE on offense.

Braeden – My dad and brother would be most influential for pushing me my whole life.

Six Star Football – What did you improve on this offseason

Braeden – This off season I have improved my speed and agility.

Braeden – is sonic or subway.

Braeden – would be against Collinsville or against Muskogee.

Braeden – would be hitting 370 on squat.

Six Star Football – Players to keep and eye on

Braeden – would be Ben Winters and Caleb Perry