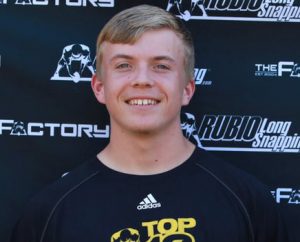 @_braedy_
One of the key elements to a teams success is their special teams play and the field position that they can give their offensive and defensive units. When senior long snapper Braedy Wilson puts on his red, white, and black uniform and straps his helmet on for the Broncos of Mustang he knows he has a job to do….A very important one at that.

Wilson plays with a passion and desire, he plays hard and fast. “Not all long snappers have the speed that I do and it gives me an advantage., “ Said Wilson. “Also I play hard because one play could turn the momentum from one side to the other.”

Braedy —The most influential person so far for me has been either my dad or Chris Rubio from Rubio long snapping. Everything I’ve learned to do with long snapping has been because of Chris Rubio. Also not only
learning snapping, I’ve developed a strong personality through his camps. My dad has helped me stay motivated in the lows when I felt like I didn’t want to play anymore.

Six Star — What camps did you attend this summer, what did you take away from those experiences

Braedy —This summer I was invited to and went to the specialist camp at Oklahoma State University, I went to FBU top gun and almost won an all American bowl game spot, I was invited to and went to the Rubio long snapping top 12 camp, and went to a Rubio long snapping camp in Dallas TX. At the FBU top gun camp I was able to take away that anybody was in it. Anybody could have left with a bowl game spot. At the top 12 camp I experienced some very high pressure situations among the 44 other best long snappers in the nation.

Six Star —What schools have shown the most interest in you

Braedy —Earlier this fall I went on an unofficial recruiting trip to Oklahoma state and had a blast meeting new friends and being able to see what cowboy football is all about. I have had interest from Oklahoma state, southern Nazarene university, and east central university. The schools showing the most interest have been Oklahoma State and East Central.

Braedy —During the past offseason I feel like I improved most on my snap speed and my snap accuracy. Before I had been snapping in the mid .7 second ranges and Ii had gotten down to a .68 second 15 yard snap. And with my accuracy I was more consistent with hitting the perfect spot.

Braedy —In my pre game ritual, I would go in the weight room, and pace around imagining the perfect game. Imagining me snapping it perfectly and running down the field to get a tackle. Then I would look in the mirror and look at myself and tell myself that I can play like that and I will play like that.

Braedy —My favorite song would have to be Luke Bryan’s-Huntin, fishin, and lovin’ every day. Just love the song because I love fishing and the outdoors

Braedy —My favorite class has to be any math class. I love putting my brain to work on complicated math problems, and when I solve them it feels good.

Braedy —My biggest weight room accomplishment was probably getting my power clean over 220 pounds because I had been struggling to get over that.

Braedy —I feel like one of my teammates, Khary BrownKhary
Brown
WR | 5'9 | 168
Mustang | 2020, could be a big star at the next level if he keeps working. He has great potential on both sides of the ball, and he has great speed.

Braedy —My hardest working teammate is probably one of my good friends, Drew McElroy. He didn’t get much playing time this year, but he was constantly working. Putting in all the effort that he could possibly use and then trying to push even more effort.

Braedy —I’d keep an eye on Elijah Young. He is a sophomore running back at my school (mustang high school) and he has crazy potential to get very good. He is a physical runner and he is hard to get him off his feet